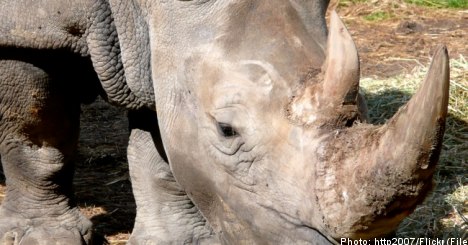 The theft at Gothenburg’s Museum of Natural History took place shortly after the museum opened on Saturday. Upon entering the building, the thief or thieves then smashed the glass casing around the museum’s stuffed rhino and then sawed off the horn.

“We suspect that we’re dealing with some sort of gang,” museum head Ann Strömberg told the Expressen newspaper.

“They probably used some sort of electric saw.”

Listed as a “critically endangered” by the International Union for Conservation of Nature (IUCN), rhinos have long been hunted for their horns, which are considered by some to be an aphrodisiac.

According to Strömberg, museums in Germany, Belgium, and Italy have also been targeted by rhino horn thieves, leading to suspicions that the thefts have been carried out by an organised criminal gang.

While arrests have been made in Germany and Belgium, no suspects are yet in custody for the Gothenburg rhino horn theft. And as the museum lacks security cameras, there are no surveillance images of whoever may have stolen the horn.

While museum officials remain upset over the defaced rhino, they hope that some good can come out of the theft.

“We’re going to try to make the best of the situation and use the incident to inform about the rhinoceros’s situation,” Strömberg told the newspaper.