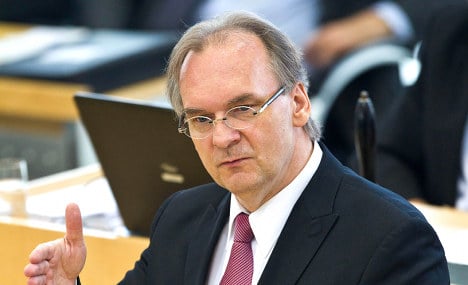 “From the German history, I think a requirement to label people is simply intolerable and unacceptable,” the Mitteldeutsche Zeitung on Tuesday quoted him as saying on a radio programme earlier this week.

Haseloff, a member of Chancellor Angela Merkel’s centre-right Christian Democratic Union, is a strong opponent of requiring uniformed police to wear name tags or identification numbers, something Berlin started requiring its officers to do this week in order to increase accountability.

In a statement, Haseloff denied he was talking about how Jews were labelled during the Third Reich, but instead was “speaking against the background of personal experiences in” communist East Germany. He has since refused to return phone calls from reporters seeking comment.

The remarks have prompted a furious reaction from Jewish groups and Haseloff’s political opponents.

“Of course he meant the Nazi era,” Stephan Kramer, the general secretary of the Central Council of Jews in Germany told the Mitteldeutsche Zeitung. “He spoke nonsense.”

Police identification requirements have been a controversial issue in the last few months with police unions and some officers arguing that name tags will make them and their families the targets of criminals.

But the city of Berlin has dismissed such concerns as overblown, seeing the police identification as a way to increase transparency and accountability in the force.