“A drop in house prices would hit growth, employment and state finances,” writes Waidelich, who also expresses concern for indebted families, who would be hard struck by a burst bubble.

“If the reason that the price is high today is only because investors believe that the selling price will be high tomorrow – when ”fundamental” factors do not seem to justify such a price – then a bubble exists.”

Waidelich criticises the governing centre-right Alliance for several policies that he feels have worsened the situation on the housing market, such as the lowered housing tax, the ROT tax deductions for building, and the insufficient amount of new apartments built.

“Inflated housing prices are a global phenomenon, but several points of the government’s economic policies have fueled this problem,” he writes.

In order to soften the blow from falling prices, however, Waidelich is open for cooperation over party lines. He also suggests that subletting apartments should become easier. 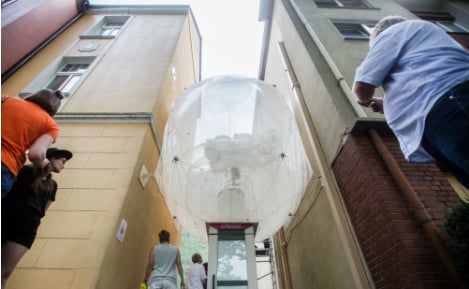 In Bochum student halls are overcrowded, renting your own flat is pricey, and finding a WG (a shared flat) is near on impossible.

A group of architecture students have come up with an innovative solution: Bloon, a transparent plastic bubble squeezed between two houses on Hugo-Schulz-Straße in the town of Ehrenfeld.

“It’s surprisingly amazing”, Alexander Rakow, one of the students, told Der Westen. “The temperature is pleasant, you can see the stars, you feel a sense of security,” he added.

Perched atop a converted telephone box which now contains a miniature bathroom and a ladder, the transparent bubble has a soft and springy floor, a cross between an air-bed and a bouncy castle. So there's no need for a sofa or a proper bed.

“It’s not as solid as a concrete floor, but nevertheless it has one, and walking around is a nice feeling,” Rakow went on to say.

A pump ensures that fresh air is constantly circulating in the bubble, which is 50 cubic metres in size.

But isn’t the whole contraption too minimalistic? It doesn’t have a kitchen, after all. Well, the inventors claim that “nowadays, students don't need much more than a place to sleep […] and their laptop.”

Passers-by are somewhat amazed yet somewhat sceptical about the creation. “I need solid ground under my feet, and four walls”, a man observing the bubble told Der Westen.

He was also put off by the transparency of the walls. But his girlfriend argued, “Today we’re all transparents – everybody posts their life on Facebook.”

The idea arose off the back of Architecture lecturer Agnes Giannone’s challenge, “How can a town like Bochum be developed, a town which needs to reinvent itself and, thanks to its students, has incredible potential?”

David Keuer, who invented the Bloon, said that at first, “they all agreed that my project was out of the question, because it would be difficult, if not completely impossible, to carry out.” Despite initial doubts, his dream has finally been made reality.

But the wacky experiment has not been cheap – a chemical company’s urban coexistence funding programme provided tens of thousands of Euros to bring the idea to life.

The futuristic invention is currently being tested for a week. Residents will decide whether they feel comfortable in the bubble, and whether they can sleep in it at all.

Although the Bloon is transparent, residents have some privacy whilst they sleep. Every evening, photos of the residents are projected onto the outside “skin” of the plastic bubble, so that people can’t see inside.

Tomorrow, the students will be discussing their creation with experts at the Art Museum, Der Westen reports.