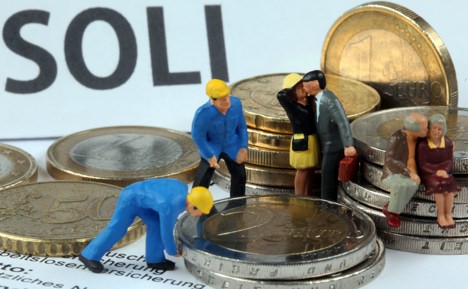 The FDP is concerned that the upper house of the German parliament, the Bundesrat, will continue to block the tax cuts that were a key plank of the party’s election campaign in 2009. The centre-right governing coalition does not have a majority in the upper house, which represents Germany’s 16 federal states.

If it does not get its way, the pro-business party is now threatening to phase out the “Soli,” as Germans call the solidarity tax.

FDP finance spokesman Hermann Otto Solms told Saturday’s edition of the Rheinischen Post newspaper, “The gradual phase-out of the Soli will be on the agenda if the Bundesrat does not face its responsibilities.”

“The ‘Soli’ can play a decisive role in unburdening the working middle of society,” said FDP deputy leader Patrick Döringt.

Frank Schäffler, an even more strident FDP finance politician, demanded a clear timetable: “The Soli should be cut in two steps – January 1, 2012 and January 1, 2013.”

The FDP is now preparing to negotiate a proposal with the Christian Democratic Union, should the Bundesrat fail to pass any other tax cuts. The party is even threatening to make such a deal a condition of signing off on Germany’s 2012 budget.

A federal court last week knocked back a challenge to the Soli’s constitutionality, but the tax’s opponents said they would appeal to the country’s high court.