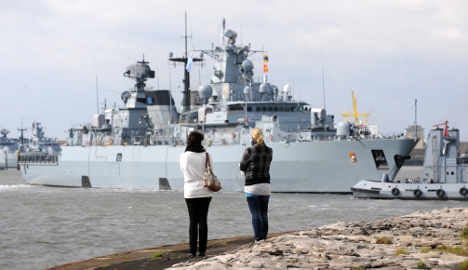 State secretary in the economics ministry responsible for maritime affairs, Hans-Joachim Otto, said on Thursday that he could not answer the repeated calls from shipping companies for soldiers or armed police officers to accompany their boats.

“We don’t want desperadoes, so we are looking into a certification,” said Otto. He said security firms offering protection would have to meet certain standards. The government had until now always rejected such a solution, unwilling to give up the state’s monopoly on the use of legitimate force.

State efforts to offer protection have not made much of a splash, with the European Union mission ‘Atalanta’ offering two operation teams – a German and an Estonian – but German ships alone undertake around 1,700 trips through pirate-infested areas each year.

The frigate Bayern left the marine base at Wilhelmshaven this Monday to take over the leadership of ‘Atalanta’ mission for four months.

Otto justified the decision to allow private firms to take on the work saying that money transports were routinely accompanied or even undertaken by such companies – no-one would expect a police team to be stationed at every bank.

Shipping firms have started taking matters into their own hands, with a study published last week by the consultancy firm PwC showing 27 German ships already carry armed security men on board, with a further six employing unarmed security operatives. Just 17 percent of the 100 firms questioned said they thought the ‘Atalanta’ mission added to safety in the pirate regions.

“We would be happy to pay for it – it’s not about saving money,” said Max Johns, VDR spokesman, acknowledging that arming ships carried risks. “The pirates are constantly upgrading their weaponry – it could come to exchange of fire which could be very bloody,” he said.

The problem of pirate attacks has led to hugely increased insurance premiums for ship owners, as well as taking costly diversions and making increased investment in ship security – as well as difficulties in recruiting.

“Around 200,000 additional shipping personnel are needed, including 50,000 officers, just for those ships on the global register,” said PwC shipping transport expert Claus Brandt.

The outlook for German shipping firms was slowly improving, the PwC report said, as the world economy pulls itself back from the crash and trade increases. Around 48 percent of those asked said they expected increased turnover this year, while 29 percent said they expected stable results.