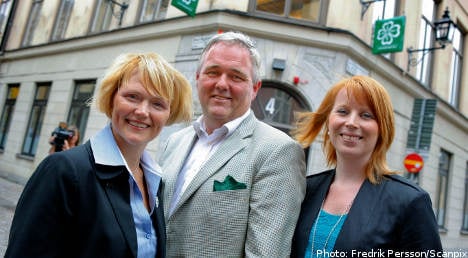 Annie Johansson, tipped as the favourite, argued that she thinks she is deeply anchored in the party and is aware of the different conditions that apply for people in different parts of the country,

She wants the Centre Party to be a more “relevant and creative” party and hopes that by 2022, the party is back at getting the support from 20 percent of Swedish voters again.

There have been doubts within the party if someone as young as Johansson, who is born in 1983, and who has very little work experience can be expected to lead the party. However, Johansson discards these concerns.

“I think that it doesn’t come down to age but what kind of support you have,” she said to news agency TT.

Anna-Karin Hatt gave many reasons as to why she wants to be the leader of the Centre Party.

She wants others to be able to climb the social ladder the same way that she has done “from a stony farm, via humanitarian aid work, to the government”.

Hatt thinks that the party policies have got too narrow in recent years.

“We have left the really important questions to others,” she said to TT.

Hatt is convinced that the Centre Party can be as large and as popular as it was in the 1970’s when Torbjörn Fälldin was head and 27 percent of Swedish voters supported the party.

MP Anders W Jonsson will have a difficult task ahead if he is to challenge the party’s most popular and well-known female figures. But he thinks he has it in him to succeed.

One of the problems with the Centre Party, said Jonsson, is that it has been to narrow when it comes to political content. They have limited themselves to policies on enterprise, environment and agriculture.

“The questions that people really care about are things like elderly care – how my old gran will get the treatment she needs – and that’s where I have genuine knowledge which enables me to widen party policies,” he said.

None of the three candidates mentioned breaking the cooperation with the other parties in the centre-right alliance, something which has been called for by many prominent and disgruntled members in recent weeks.

Maud Olofsson, who has led the party for more than ten years, announced her intention to step down on June 17th. The new leader will take up the post in September 2011 following the party conference.