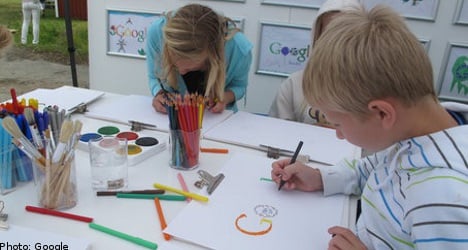 Special events, celebrities or holidays are often celebrated with a “doodle” – a redesigned Google logo. At Christmastime, Internet users may discover Santa peeking out behind one of the letters, or at Halloween, an ‘o’ may be replaced with a pumpkin.

The turn has now come to young football players at Sweden’s Gothia Cup to send in their suggestions for a new “doodle” logo, as the competition returns to Sweden for the first time since 2008.

“It’s really fun to see Doodle 4 Google back in Sweden again. We had a huge response last time, and considering the creativity we’ve seen in the country’s inhabitants, and among young people, we’re hoping to see at least as many contributions this year,” said Andreas Svenungsson, Google’s communications officer, in a statement published on Monday.

“Above all, we’re looking forward to meeting and speaking with our young users at Gothia Cup,” he continued.

Gothia Cup is a huge youth football tournament held yearly in Gothenburg, in which 1600 teams from 60 nations participate.

Visitors to the tournament will be able to submit contributions to Google’s competition at Google’s lounge in Gothia Kviberg Center, but can also create doodles using Google’s digital graffiti wall.

The competition will be open until August 6th, when a jury, including Dennis Hwang, Google’s webmaster, and among others Peter Jetzel, Google’s Nordic marketing director, and the singer-songwriter Andreas Carlsson, will choose the 20 best contributions.

The winner, however, will be chosen by the general public, who will be able to vote their favourite of the 20 finalists.

On top of showing the winning “doodle” on their search engine, Google will be donating 10,000 kronor ($1,500) to the winner’s football club, and 10,000 kronor to Unicef’s charity work for children.