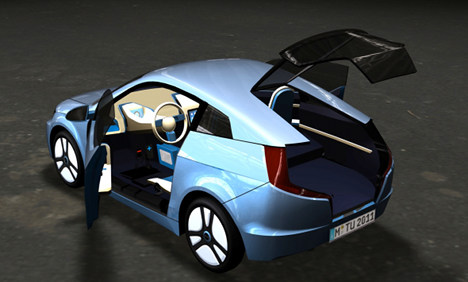 This week researchers performed their first driving test with a prototype for the Mute electric auto, a 3.5 metre-long car that could serve as a model for future electric vehicles.

Right now, purely electric cars don’t make financial sense for most consumers. In addition to having to repeatedly charge their batteries, they are expensive compared to most conventional petrol-powered vehicles.

An all-electric Chevrolet Volt – one of the very few affordable electric models available – starts at about €23,120, whereas the petrol-powered ultra-affordable Smart car can be had for €8,831.

The university won’t yet say how much the Mute might cost, but they do say its secret lies in its low weight of only 400 kg, which allows it to drive further on a given battery charge.

“Low weight is essential for electric vehicles,” said Professor Markus Lienkamp, head of Automotive Technology at TUM in a statement. “More weight requires higher battery capacity for the same range and thus generates significantly higher costs. More weight also means inferior dynamics for a given level of motor power. But what we are aiming at is an affordable car that is fun to drive.”

Fun it certainly is, they claim. The researchers say the Mute showed outstanding driving dynamics during its test run.

When finally released, the Mute will be able to drive at least 100 kilometres on one charge and reach speeds of up to 120 km/h.

More than 200 students and a staff of 20 academics have been working on the project. It is set to be unveiled to the world at the International Motor Show in Frankfurt in September.