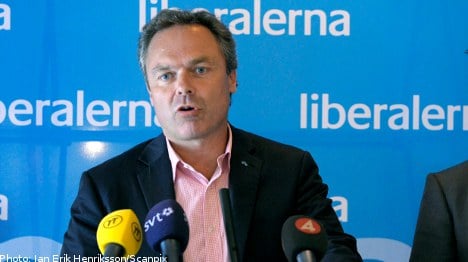 Applicants must also speak English or Swedish, and be able to support themselves.

During their day in Almedalen, the Liberal Party also put forward suggestions about opening for business immigrants, and simplifying for guest students who wish to stay in Sweden to work.

Jan Björklund, Liberal Party leader and minister for education, pointed at the need for more highly qualified labour immigration. He underlined that it should be made easier for researchers and engineers, among others, to come to Sweden.

“Economic development is no longer tied to machinery, and the countries who succeed in attracting very qualified and competent people will perform much better,” said Björklund to news agency TT.

The Liberal Party also calls for people with experience of running companies, who also have a starting capital, being permitted to move to Sweden and start a business.

Björklund will be pursuing these questions in the government, in the hope to turn them into real politics.

“This is in line with the view on employment and labour immigration that the government has held previously. It’s just taking it a few extra steps.”

The Christian Democrats tried to pass their own version of two of these suggestions in the negotiations over the Alliance’s manifesto, before the election last year.

“It was in the negotiations, but didn’t pass,” said Gunther to TT.