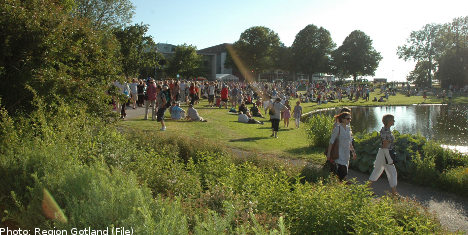 Almedalsveckan first began in 1968 when Sweden’s then prime minister, Olof Palme, was due to take the ferry home from a summer holiday in Gotland (an island off Stockholm’s coast).

Local residents asked if he could stay a moment and give a speech. Standing on the back of a nearby truck, Palme spoke to the small crowd, thus beginning what was to become an annual Swedish tradition.

43 years on, things have evolved enormously. The solitary speaker (and the truck) is long gone, and the event has become a platform for Swedish politicians from every party to have a voice.

Thousands flock to the island to participate in the workshops, speeches, seminars, and other political activities.

Janica Sörestedt, the Social Democrats’ local representative, believes the strength of the event is its openness.

“It’s open for everyone, from the most highly educated to the ordinary citizen” she told The Local.

“Everyone and anyone can participate in such a wide range of activities. This is the essence of Almedalen.”

According to Sörestedt, people come because they want to connect, meet new people, and educate themselves.

Johan Elmberg, the Head of Press for the Moderate Party, explains “Almedalen is the absolute centre of Swedish politics and media coverage for a whole week.”

“The main objective of Almedalsveckan is to stimulate political debate, but there’s a lot more than that on offer,” he said.

A whole lot more, in fact. This year promises the biggest week so far, with some 1450 events planned for the week.

Politicians, journalists, lobbyists, unions, NGO’s, and company representatives are expected to make up the majority of the crowd. Last year some 11 000 people attended.

Every political party of the country has their own day, which culminates with the party leader speaking in the evening.

And for the first time, Almedalsveckan will last eight days due to the inauguration of Sweden’s eighth political party, the Swedish Democrats, earlier this year.

However, while the politics is a large part of the week, it is by no means the only focus. It is also a chance for people and companies to discuss ideas, host workshops, and create an ‘island community’ of socializing, and sharing ideas and knowledge.

In fact, communication is the focus of the event. As the event exploded in popularity in the 2000’s, measures were taken to ensure the week was not transformed into a political marketplace.

“People were selling ideas instead of discussing them,” Sörestedt said.

“We had car companies wanting to sell their products, to cover Almedalen in advertising – but we put a stop to it. Almedalen is not a marketplace; it’s a way to meet people, to connect, and to get your ideas out.”

The transformed event has been so successful for Sweden that other countries have been taking note. Denmark was the first to follow Sweden’s lead, initiating its own similar week of political festivities earlier this month, on the island of Bornholm.

One may wonder if the festival’s popularity can be attributed to Sweden’s democratic and casual lifestyle.

“Sweden’s freedom and openness are reflected in the festival itself,” said Sörestedt.

“This is a country where our politicians can walk around the streets as ordinary people. You don’t get that in every country.”

According to Sörestedt, one of the best things with the week is that everyone can join in.

“There’s definitely something for everyone, no matter your tastes or preferences,” she said. “You can just walk down the streets and feel the unique, engaging environment. You have to come to Gotland, you have to take it in!”