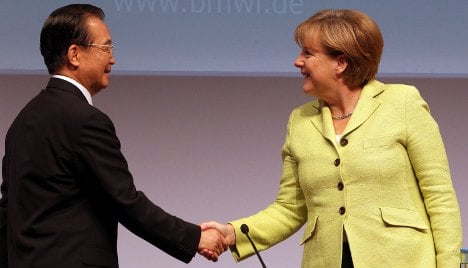 The new contracts, including one for the purchase of 62 A320s from European aircraft manufacturer Airbus, were signed at a press conference with Wen and Chancellor Angela Merkel after a meeting of 23 German and Chinese ministers.

Berlin rolled out the red carpet during the two-day stay of the Chinese delegation, starting with an informal dinner for Wen and his inner circle hosted by Merkel at a lakeside villa Monday.

But Wen insisted Tuesday that despite “growing and deepening ties,” he would not accept lectures on human rights or the rule of law from European partners.

“China respects the political system and the development model chosen by the citizens of the EU,” he told a conference of German and Chinese business leaders at a Berlin hotel.

“In exchange, we expect from the EU respect of our sovereignty, our territorial integrity and the autonomous choices of the Chinese people.”

At the press conference, Merkel welcomed the release of prominent Chinese dissident Hu Jia and outspoken artist Ai Weiwei from custody amid a government crackdown on dissent. But she said that Germany expected Ai’s case and others like it to receive a “transparent” handling by Chinese authorities.

Western nations including Germany had repeatedly urged Ai’s immediate release. But Berlin has expressed serious concerns about apparent restrictions on Hu and Ai including their freedom to speak to the media.

Human Rights Watch had urged Berlin to place the issue front-and-centre at the talks, saying that Ai’s release showed “that political pressure on the Chinese government works.”

While Merkel welcomed Wen to her chancellery with military honours, a few dozen demonstrators waved Tibetan flags and shouted “Freedom for Tibet!” in German.

And at the end of the press conference, a German protester held up a golden-coloured, waving cat figure emblazoned with Chinese characters and a club in its paw, which he called a “prize” for Wen.

“For the economy, for billions in deals,” he shouted.

Wen told reporters in London Monday that China would not accept “finger-wagging” over human rights.

No financial details were given on the Airbus deal but press reports in Germany said the framework agreement was worth more than €7 billion ($10 billion).

Other contracts signed included one on an electric car project between German auto giant Volkswagen and its Chinese partner FAW and a factory in Foshan.

VW also signed a deal with Shanghai Automotive Industry Corporation, while Daimler and the Beijing Benz Automotive Company inked an agreement on investment in new products, engines and a research and development centre.

The ministers also signed a raft of agreements on deepening cooperation in areas including climate protection, energy efficiency, food safety, education and the arts.

The globe’s number two economy, China, and number four, Germany, have seen trade volume rise by leaps and bounds in recent years, to hit a record €130 billion ($184 billion) in 2010. Both sides hope to boost the figure to €200 billion annually by 2015.

“We want to encourage (Chinese companies) to invest even more in Germany,” Merkel said, adding: “You are welcome.”

But amid German firms’ concerns about protection of their intellectual property rights and widespread piracy in China, Merkel highlighted the need for “fair and reliable rules of play” between the two countries.