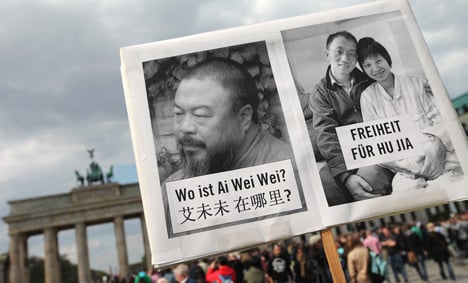 “Despite the relief that Ai Weiwei is back with his family, it remains a fact that his freedom is subject to oppressive restrictions,” Westerwelle told the Welt am Sonntag newspaper.

The internationally renowned contemporary artist was released from jail after 80 days on tax-evasion charges. The 54-year-old has been told by authorities that he cannot leave the Chinese capital nor discuss his case.

“The quality and depth of our relationship allows us to talk about even difficult subjects,” Westerwelle said, adding that he would make clear to his Chinese guests “how important freedom of opinion, freedom of the press and the respect for human rights are to us.”

On Monday, Chinese Premier Wen Jiabao will arrive in Germany from Britain with 13 ministers and a large business delegation. After a working dinner with Chancellor Angela Merkel on Monday evening, there will be a joint cabinet meeting on Tuesday.

However, he insisted Germany would not soft-pedal its message on humans rights over fears about hindering future growth.