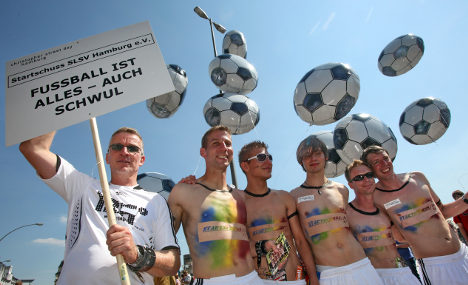 The German women’s soccer team is first and foremost focused on a world championship. But some players have a message for the German public: It’s OK to be gay.

Going public isn’t quite the norm among gay players in Germany‘s female soccer leagues, with most maintaining a strict code of silence for fear of backlash from fans, teammates and sponsors.

But a more accepting environment has recently led several players to come out.

Theo Zwanziger, president of the German Football Association (DFB) and a critic of homophobia in sports, said he hopes openness in the women’s game can pave the way for similar changes in the men’s Bundesliga, in which no players have come out publicly.

“The women are kind of an icebreaker in this sense, and we have always supported them,“ he said.

“But ultimately it is up to every individual to decide whether to keep things private or open up to the public.“

Despite progress, a stigma remains attached to homosexuality in sports, said Tanja Walther-Ahrens, a former footballer and outspoken advocate of the European Gay and Lesbian Sport Foundation.

In 1995, the DFB prohibited national team players from participating in the European Gay and Lesbian Sport Championships in Frankfurt. Several players had expressed interest in participating, but none wanted to risk being dropped from the national squad before the 1996 Olympics in Atlanta.

Homosexuality “is still seen by some as a sickness,“ Walther-Ahrens said. “The issue has become taboo once again.“

Players like Angerer and Holl have set positive examples for gay players looking to go public. Still, many more appear happier to remain hidden, potentially for fear of damaging their marketability, especially with the advent of this summer’s Women’s World Cup.

The DFB has taken a hands-off approach with the issue of homosexuality in the sport, preferring by and large to leave matters to the players themselves.

“There is no code of conduct for DFB players in terms of their sexual orientation,“ said national team manager Doris Fitschen. “No one is forbidden from coming out, and I’m convinced that such a player would face no disadvantage.“

Said Angerer: “In women’s football you don’t need to have any concerns.“

Walther-Ahrens may tend to disagree, but she still sees the opportunity for progress.

“More girls and women would play if this lesbian cliché did not exist,“ she said. “Football is a reflection of society, and if we can change something here, maybe we can change society, too.“