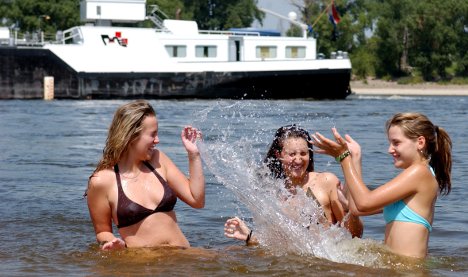 Swimming in the river is still technically illegal, partly over concerns that the water is too dirty. But city Councilwoman Katharina Welcker for the conservative Christian Democrats (CDU) told regional daily the Kölner Stadt-Anzeiger this week the Rhine was now clean enough for bathers.

She said a controlled swimming environment would be safer for people and the environment alike, since many residents go swimming in area lakes despite rules that often forbid it.

The head of the CDU group in the city council, Winrich Granitzka, told the Stadt-Anzeiger that private investment will be necessary in order to make the plans a reality.

He said the city must “cooperate where appropriate, with private investors.”

Officials are discussing the issue on June 30, although it’s unclear when a final decision might be made.

In decades past swimming in the Rhine was a popular activity. An initiative to install a floating swimming pool barge in Cologne-Mülheim like others already in use in Berlin in Hamburg failed to find backing, according to the paper.