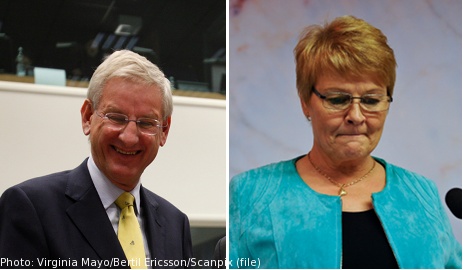 “It is when he is the most serious that he is the funniest,” said Erik Blix, host of a satire show on Sveriges Radio (SR), to daily Aftonbladet.

It is the third year running that Comedy Central has mapped out Swedes’ views on politics and humour.

In the 2011 survey, 26 percent of Swedes picked Carl Bildt as the funniest of Sweden’s 24 ministers.

Erik Blix was surprised that Anders Borg made the cut, but professed his admiration for the wit of Christian Democrat leader Göran Hägglund.

“I once asked Göran Hägglund if he was selling the Christian Democrat party to the devil and he immediately retorted “How much do you want for it?” said Blix to Aftonbladet.

According to the survey, the most boring minister in Sweden is Maud Olofsson, minister for energy and enterprise, followed closely by minister for the environment, Andreas Carlgren.

Peter von Satzger, head of Comedy Central, thinks that Swedish politicians would do good to improve their sense of humour.

“Humour in politics is something that is actively worked on in the US and Britain. To be witty is something in which perhaps especially British politicians fight to outdo each other,” said von Satzger in a statement.

Von Satzger also thinks that wittiness is a strong leadership characteristic that bears witness of kindness and being good for a laugh.

“Looking at it from that angle, Swedish politics is rather too boring. I am convinced that more Swedes would take an interest in politics if they felt it was more entertaining,” von Satzger said.

Last year’s report showed that a staggering 46 percent of Swedes thought that there wasn’t enough humour in Swedish politics, while one-third thought they’d be more interested in politics if it was a bit more fun.

The funniest international politician in 2010 was Italian prime minister Silvio Berlusconi, according to last year’s report.

The full report for 2011 will be presented at the Almedalen political week, on the Baltic island of Gotland, in July.