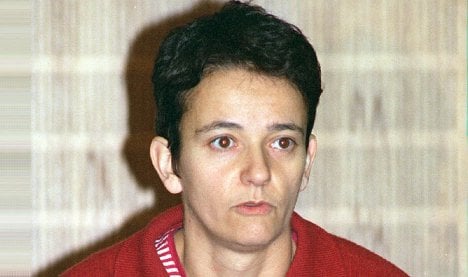 Hogefeld, 54, on Monday left the Frankfurt-Preungesheim open prison in Germany after being sentenced in 1996 to life imprisonment, a spokesman for the Hesse state Justice Ministry said.

She had been convicted on four counts of murder for the death of three Americans and a German police officer and 10 of attempted murder in relation to a number of other RAF attacks in the 1980s.

Hogefeld was a key figure in the so-called third generation of the RAF, the murderous “anti-imperialist” extremist outfit also known as the Baader-Meinhof Gang after its original founders Andreas Baader and Ulrike Meinhof.

Her dramatic arrest in June 1993 came after a shoot-out with police in Bad Kleinen, northeast Germany, in which her partner Wolfgang Grams, with whom she had been on the run for a decade, died, together with a police officer.

Germany may yet jail another RAF member, however, with Verena Becker currently on trial – although she is out on bail – for her alleged role in the 1977 killing of West Germany’s top prosecutor.