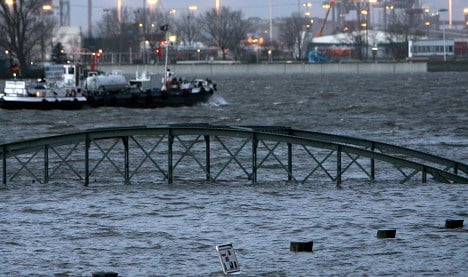 The study, published in the American journal “Proceedings of the National Academy of Sciences,” and co-authored by Stefan Rahmstorf of the Potsdam Institute for Climate Impact Research (PIK), appears to lend credence to fears low-lying cities are at risk of flooding.

The scientists charted sea level changes by measuring fossil deposits on North America’s Atlantic coast. They found that levels were stable between 100 BC and 950 AD and then rose on average 0.6 millimetres per year for the next 400 years.

But since the late 1800s – when industrialization took off in Western countries – levels have risen by about 2 millimetres per year. That’s the most at any time in the last two millennia.

Scientists fear such rises could lead to low-lying cities being inundated with water, forcing millions of people to move to higher ground.

To calculate the changing sea levels, the study authors took core samples from 10 North Carolina salt marshes. They then looked at the fossil shells of organisms called foraminifera.

But though the study’s authors believe the results are likely representative, other scientists have questioned the fact that the study relies so heavily on data from North Carolina.

Michal Kucera, a professor at the University of Tübingen, told the website of news magazine Der Spiegel that this was the study’s “Achilles heel.”

Rahmstorf is one of many scientists arguing that climate change is accelerating, leading to more extreme weather phenomena like flooding and heat waves.

“A number of studies have shown that the frequency of extreme events has increased,” he said.