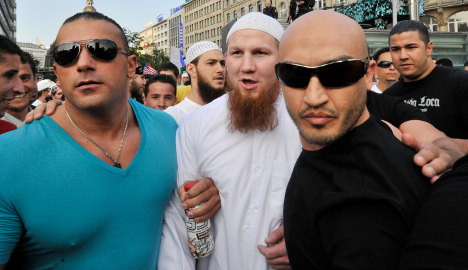 Hesse Interior Minister Boris Rhein of the conservative Christian Democratic Union told daily Die Welt that Salafism was a “centre and pivot for those who want to participate in so-called holy war.”

“Salafism can in this way lay the path to Islamist terrorism,” he said, adding that the law needed to be changed so that “hate preachers” can be more easily thrown out of the country.

“In future, this should be possible when someone spreads material that goes against the liberal democratic basic order or that fosters radicalisation or, as the case may be, terrorism recruitment.

“We should also change the corresponding laws covering the right to assembly and paragraphs of the sedition law.”

Interior ministers from Germany’s 16 federal states plan to discuss the issue when they hold a regular meeting on Tuesday. The Financial Times Deutschland reported Tuesday that the Verfassungsschutz domestic intelligence agencies would be intensifying their monitoring of the Salafist scene.

“Salafism is seen both in Germany and on the international level as the dynamic Islamist movement at the moment,” a Verfassungsschutz expert, who was not named, told the FTD.

Salafism is a strict adherence to the Koran and the earliest principles of Islam from between the 8th and 10th centuries. They aim to reorder society, the state and the law according to Salafist values regarded as God-given.

Rhein said that Salafists wanted “a return to a stone-age Islam and want to turn Germany into a theocracy.”

“They demonise anything western. The preach hate, intolerance and exclusion. They call for the stoning of adulterers and death sentences for homosexuals. They reject the equality of men and women. This ideology is at odds with our fundamental values. It is in every way unconstitutional and dangerous.”

“I am warning against underestimating the danger arising from Salafism,” he told the FTD. “Almost all terrorism issues in the past have been somehow or other traced back to a tendency to radicalisation from Salafism. We have to be especially watchful here.”

One of the most prominent representatives of Salafism in Germany is the former boxer Pierre Vogel, who now goes by the name Abu Hamza, whose sermons and internet videos are popular with young followers.

The young Kosovar Arid Uka who underwent a rapid radicalisation and killed two US military servicemen at Frankfurt Airport at the start of March, followed Vogel as a Facebook friend.

Rhein described Vogel as a “spiritual firebrand” who had the ability to radicalise young men but was careful not to break the law – for example by advocating violence.

Vogel has expressly condemned violence in the name of Islam, though Rhein pointed out the former boxer had wanted to hold a memorial service in Frankfurt for Osama bin Laden after the late al-Qaida leader was killed by American forces. Rhein said authorities were examining whether Vogel’s group, “Invitation to Paradise” ought to be banned.

Herrmann said: “We must not allow home-grown terrorists to breed and gain control under our noses. We have to come down on Salafism and its ideology decisively and with all legal means.”

Close observation was difficult because there is no clear hierarchy and even clear numbers of Salafists are hard to gauge.