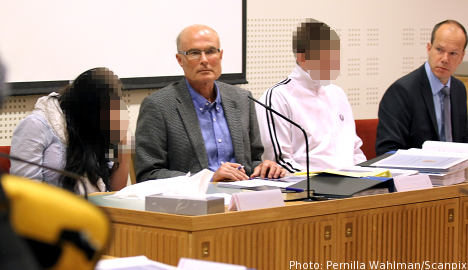 “It really wasn’t as brutal as it sounds,” said the murder suspect when he described the assault that led to the death of teacher Tommy Johansson, who was found beaten to death in his apartment in Hofors in eastern Sweden.

The two men and one woman are charged with the crime are all in their early twenties.

The three suspects had visited a pizzeria in Hofors on April 3rd where they ran into Johansson, who had been one of the woman’s favourite teachers in high school.

When the trio left the restaurant, the woman told her two male friends that Johansson had groped her and touched her breasts. Her boyfriend reacted violently, and found out where the teacher lived.

Once he’d found the address, the three broke into Johansson’s apartment.

There they beat Johansson, subjecting him to severe and prolonged assault that verged on torture, according to prosecutors.

The three suspects also stole a computer as well as Johansson’s cash card before leaving the scene.

Part of the assault has been documented, as one of the men brought out his mobile phone camera to record the proceedings.

The 20-year-old woman testified on Tuesday that when she took her boyfriend to her teacher’s house she had only intended for them to “talk”.

“I thought I’d just let him know he had done a bad thing,” she said while interrogated.

But according to the woman, her boyfriend, who is now facing murder charges, beat the teacher to the ground. While sitting down on top of him, he proceeded to punch the man in the face three times.

“And that was when I kicked him in the side of his abdomen and in the groin,” said the woman and burst into tears.

Crying, she then continued telling how the 20-year-old man continued his assault on the teacher by hitting him in the stomach and then jumping on both his chest and his head, all the while being filmed with a mobile phone camera.

Unlike the woman, the male murder suspect didn’t show any emotion. He accounted for what he had done that evening, denying having urged his girlfriend and the other man to come with him to the teacher’s house.

When the trio had trouble getting the 54-year-old’s door open, the man was close to giving up his plans to attack the teacher.

“I wasn’t going to bother. But then I changed my mind and made another attempt and managed to break the glass,“ he said in court.

The 20-year-old retold how he then assaulted the Johansson.

“I jumped on his chest, not from up high, it was more to make my point. I did that twice,” he said.

He also claimed to know from previous experience with violence what kind of consequences different levels of abuse could have and that this assault really wasn’t as brutal as it sounds.

“Sure, you probably shouldn’t jump on people but I did and it was just a stupid thing to do,” he said to the court.