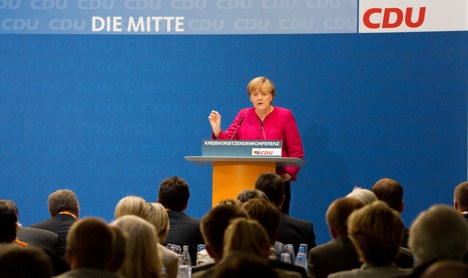 “We must be sure to try to have a substantial contribution” from private creditors like banks and insurance companies for debt-laden Greece, Merkel told a meeting of her Christian Democrat Union party in Berlin.

But the German leader added that “at the moment we can only get the participation of the private investors on a voluntary basis.”

The “voluntary” nature of such involvement is key for many observers, who fear that forced input from the private sector would be seen as a debt default on the part of Greece, with ramifications far beyond.

German Finance Minister Wolfgang Schäuble echoed Merkel but also stressed that the private sector’s role should be “quantifiable” and “guaranteed”, in comments made to the daily Börsenzeitung.

The EU and the International Monetary Fund are trying to assemble a second bailout package for Greece worth almost as much as last year’s €110 billion ($156 billion) loan deal.

However in return, Athens will have to introduce strict austerity measures to rein in the burgeoning national debt, leaving the government to deal with widespread public protest.

In the latest demonstration, police said up to 3,000 protesters took to the streets of Athens on Saturday.

Supporters of the All Workers Militant Front (PAME) marched towards the city’s main Syntagma square and the parliament, the site of a three-week-long protest of the group calling themselves “The Indignants.”

The Greek General Confederation of Labour (GSEE) also announced plans to strike during an upcoming parliamentary debate and vote on the country’s future budget plans.

As Greece’s new cabinet works to muster parliamentary support for the tough package demanded by the EU and IMF, finance ministers from the 17 euro nations will gather on Sunday evening in Luxembourg for the first of a series of crucial crisis meetings this week.

As Greece faces imminent default, they will debate whether to release the next installment of the bailout from 2010 – €12 billion Athens needs to pay the bills in July.

With the IMF demanding assurances that Athens can finance itself over the next year before paying out, the terms of a second rescue package will also come under scrutiny.

The informal conclave, due to carry on through Monday and expand to the full 27 EU finance chiefs, comes ahead of a key bloc summit on June 23 and 24 that is due to put the final stamp on an economic governance package.

Initially aimed at assuring markets that Europe would avert future debt crises through closer monitoring and streamlining of economic policies, the summit will instead be overshadowed by events in Greece.

In Luxembourg ministers will look at how to involve banks and private lenders in the next Greek bailout, in line with demands from countries such as Germany, Finland and The Netherlands keen to reassure taxpayers unwilling to pay for excesses elsewhere.

“We are working on a new programme to be finalized rapidly with additional financing,” EU president Herman Van Rompuy said in Dublin this week.

Merkel’s comments came a day after she appeared to give ground on her previous demands for private involvement following talks in Berlin with French President Nicolas Sarkozy.

Merkel had been pressing for private investors to contribute up to a third of the second rescue package by accepting later repayment on their Greek bonds.

She said she now backed a new package along the lines of a deal on Romanian debt agreed in Vienna in 2009, whereby private banks agreed to buy new government bonds to replace ones that matured.

Eurogroup chief Jean-Claude Juncker said Saturday that the problems which have forced Greece, Ireland and Portugal to seek emergency aid could affect Italy and Belgium, even before Spain which had been tipped as the next casualty.

The Luxembourg prime minister, who heads the group of eurozone finance ministers, told the German daily Süddeutsche Zeitung, “we are playing with fire.”