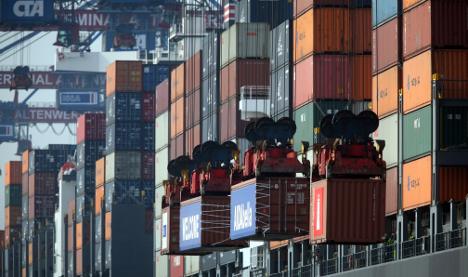 Nuclear material and dangerous chemicals for the nuclear power industry are being shipped through Rostock without anyone being informed,

According to the regional daily Ostsee Zeitung, politicians in the northern German city are outraged after it appears as if neither the company running the harbour nor the port fire service were told what was going on.

The newspaper reported on Tuesday that fresh fuel elements from a nuclear facility in Västeras, Sweden, were delivered to the Rostock port on May 4, heading for the Brokdorf nuclear power station near Hamburg.

And the Federal Office for Radiation Protection (BfS) said a total of 21 such transports had been handled by the Rostock port since the start of the year.

Although no nuclear waste is being taken through Rostock, the fuel elements are moving in one direction, and uranium hexafluoride is going in the other – via Rostock to Sweden. This is not radioactive, but is highly volatile and reacts violently when it comes into contact with water or water vapour in the air.

Reporter Andreas Meyer, who said he and his colleagues had worked for two weeks to prove the story, told The Local via email on Tuesday that the uranium hexafluoride was highly poisonous. The transport of such chemicals and the fuel elements through the city – and the fact it had been kept secret until now – had sparked outrage, he said.

“Not even the fire service in Rostock was informed. And they would be in service in the case of an accident,” he said.

“It is a real scandal that the population was told nothing about this. The federal government must be more transparent,” said Harald Terpe, Rostock federal MP for the Greens.

But harbour master Gisbert Ruhnke told the paper it was “totally normal that fuel elements are transported via Rostock.”

He said it was not comparable to the castor transports which involve containers of highly-radioactive material being taken to storage sites, and which are often targeted by protesters.

The Mecklenburg-Western Pomerania state Interior Ministry responsible for the transport, said the uranium products were only slightly radioactive, although they must be kept in special containers in order to prevent chain reactions according to the Ostsee Zeitung.

“The Federal Office for Radiation Protection only checks whether the security requirements of the nuclear laws are fulfilled,” said a spokeswoman for the office. She said several routes were registered for each delivery although only one is used – for security. Some transports are accompanied by the police.

Yet harbour owner Hero mbH did not seem to be informed. “Hero has no positive information of its own about such cargo,” said company head Ulrich Bauermeister.

The paper called the statement nebulous and suggested it probably meant that the harbour operator had not been told what it was handling.

Even other ministries did not seem to have been informed by the state Interior Ministry. The Ostsee Zeitung said it had information that its exposure of the matter had caused friction between the Christian Democratic Union and Social Democratic Party government coalition partners.

Interior Minister Lorenz Caffier of the CDU was said to have failed to inform Transport Minister Volker Schlotmann, of the SPD, who was ‘more than annoyed’ by the information when he received it from a third party. This was later dismissed by his spokeswoman as nonsense.

Only last December the voters of Rostock had petitioned the mayor to block any nuclear transports from the harbour.

“Our application was aimed at preventing the transport of castors through the city. No-one knew that new fuel elements were regularly driven through Rostock,” said Johann-Georg Jaeger, head of the Greens in the city’s parliament.

“We now have to consider how we can expand our application. We don’t want new fuel elements in our city either,” he said.

The lack of information given to harbour workers was scandalous, he said.

“The workers and the neighbours of the harbour are being endangered – and no-one is telling them,” he said, adding that the same went for travellers and holidaymakers on the ships which were bringing the material to and from Sweden.

PARTNER CONTENT
The fast track to a Swedish career
Url copied to clipboard!