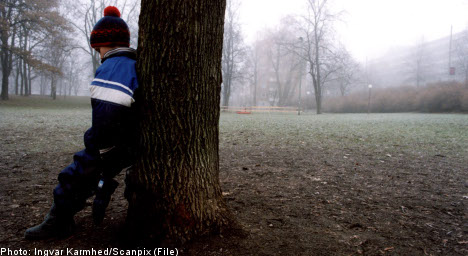 The consequences for children who live in poverty are very serious, underlined Save the Children Sweden’s secretary-general Elisabeth Dahlin.

“To grow up in social exclusion is a very bad start in life. These children are quiet and loyal and take significant responsibility for the family finances – they don’t take part in school outings or leisure activities, the clothes they wear are too small and they can never go to the cinema or football,” she said.

Dahlin called on the Swedish government to act to address the situation.

“Sweden has long rightly claimed to be a pioneering country in how we care for and support families with children. Let us show that we still take responsibility for reducing child poverty,” she said.

Save the Children’s new report entitled “Welfare state, not for all” (Välfärd, inte för alla), is a follow up on a February report on the incidence of child poverty in Sweden.

The February report showed that the proportion of children living in families unable to provide the most basic items such as food, clothing and housing, increased to 11.5 percent in 2008, from 10.9 percent in 2007 – the lowest levels since records began in 1991.

According to the charity there are three distinct groups who are the worst affected: single-parents, newly arrived immigrants and young parents who are not yet established on the labour market.

Social Democrat leader Håkan Juholt on Tuesday argued that the increase in child poverty is due to three problems: high unemployment combined with labour shortages in key sectors, a “drastic decline” in the employment of women and the expansion of charges in schools.

“It is clear that Save the Children write that the distributive policies in favour of child families have failed,” he said.

“I regret that some of those commenting don’t begin with the most obvious – namely to ensure that the number of jobs is increased,” he said.

Reinfeldt identified a raft of government measures to aid families, including a hike in child and housing benefits.

He furthermore identified work to improve integration as key to tackling child poverty, including lowering the thresholds for employment for people from other countries.

Save the Children Sweden concluded in its report that the redistributive effects of family policy have declined in recent decades and argued that measures need to be taken to address the growing inequalities.

“The ability to reduce poverty has declined over the past ten years and the precision with which social safety nets are able to capture vulnerable families with children has disappeared,” the charity argued in its report.

Save the Children Sweden suggested two immediate initiatives to begin to address the problem: to raise the guarantee level of parental insurance (currently 180 kronor ($30) per day) to a “reasonable sum”, and to boost income support in line with inflation.

The charity’s February report showed that while ten percent of Sweden’s children lived in poverty, the problem was far greater among single-parent families and families with foreign backgrounds – 24.7 and 29.5 percent respectively.

Child poverty was defined on an index combining two factors – low levels of relative income (according to Statistics Sweden figures on normal basic consumption), or living with income support (a guaranteed minimum level established by the Riksdag in 1998).

Save the Children Sweden has produced an annual report on the incidence of child poverty in Sweden every year since 2002.