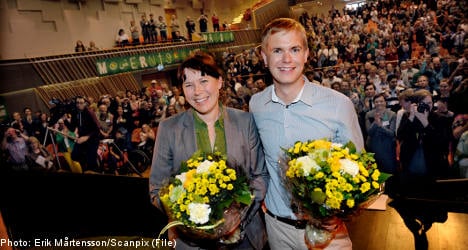 The move appears to have been a positive one, as a new voters’ survey shows the Greens reaching a new record high.

In the poll, recently conducted by the Demoskop polling company and published on Sunday in the newspaper Expressen, the Green Party received 11.8 percent of the vote.

The figure represents an increase of 1.3 percentage points since the last poll, in May, and a hefty rise from the election results of September 2010, where the Green Party received 7.34 percent of the vote.

“Considering the strong support Maria Wetterstrand enjoyed, one might have thought that the support for the Green Party would diminish after the change of spokesperson. In the short run, there don’t seem to be any such tendencies,” Anders Lindholm, CEO of Demoskop, told Expressen.

The Social Democrats, however, have less reason to celebrate.

In the last poll, conducted in May, the party finally saw itself as Sweden’s largest party again with the support of 32 percent of voters, after two years spent in the shadow of the Moderate Party.

The most recent poll, however, showed that their upward trend has been broken. Support has once again dwindled, and the formerly unrivaled giant on Swedish politics is once again under 30 percent.

The ruling Moderate Party, meanwhile, received the most support in the recent survey with 32.1 percent.

Overall, the currently governing Alliance of the four right-wing parties, the Moderate Party, the Liberal Party (Folkpartiet), the Christian Democrats and the Centre Party retained their lead over the three left-wing parties, the Social Democrats, the Green Party and the Left Party.

Overall, the Alliance received 47.1 percent against the opposition’s 46.3 percent.

The Sweden Democrats (Sverigedemokraterna), the far-right party elected into Riksdag for the first time in 2010, saw support diminish slightly to 7.1 percent.