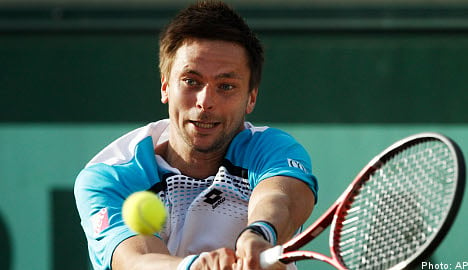 Söderling was undaunted at the prospect of playing in front of a 15,000-strong partisan crowd.

“It’s quite nice having everybody against you,” he told newspaper Aftonbladet.

Simon became the third Frenchman through to the last 16 with a comprehensive 6-3, 6-4, 6-2 win over the last remaining American, Mardy Fish.

Rafael Nadal and Novak Djokovic stayed on course for a second Grand Slam final showdown with both notching up wins in Saturday’s third round action.

But if the top two seeds enjoyed a worry-free afternoon, the same could not be said for fourth seed Andy Murray.

The 24-year-old Scot had been coasting along at 6-2, 2-1 and deuce on German Michael Berrer’s serve when he badly jarred his right ankle trying to run down a drop shot.

Murray won the point, but he hopped about in agony and then collapsed onto his back in the red dirt of the Suzanne Lenglen showcourt.

After taking painkillers and having the ankle strapped at a medical time-out, Murray resumed to clinch the break and lead 3-1.

But clearly still in some discomfort, he then dropped serve for the first time in the match and screamed out his frustrations at his coaching staff in the stands.

Limping between rallies and looking distraught, Murray somehow dug in to win the set 6-3 and another two breaks in his favour gave him the perfect 4-0 start to the third set.

Murray duly wrapped up a third consecutive straight sets win, but there will be serious doubts about his fitness ahead of his fourth tie against Serbian Davis Cup hero Viktor Troicki on Monday.

A scan later Saturday or on Sunday will be crucial in his decision over whether or not to pull out.

The 15th seeded Troicki saw off Alexandr Dolgopolov of Ukraine 6-4, 3-6, 6-3, 6-4 to reach the last 16 of a Grand Slam event for the first time despite being laid low with food poisoning.

Second seed Djokovic made it 40 straight wins this year by finishing off giant Argentinian Juan Martin del Potro 6-3, 3-6, 6-3, 6-2 in a third round tie held over from late Friday when the two men had parted at one set all.

On the resumption, Djokovic once again showed all the composure and killer instinct that have been a feature of his stunning unbeaten run since January and he comfortably dealt with some typically beefy hitting from the 2009 US Open champion.

The Serb will next play back-to-form Frenchman Richard Gasquet for a place in the quarter-finals in a tie that is sure to fire up the partisan Paris crowd on Sunday.

“Richard is playing some of the best tennis of his life,” Djokovic said of his next opponent.

“He has a lot of confidence and self-belief and he will have the crowd behind him.

“It seems like he is striking the ball better than ever – more consistent mentally. It’s an open match.”

Djokovic will match John McEnroe’s 42-match winning streak set from the start of 1984 should he reach the semi-finals here.

He is also aiming to become the first player since Jim Courier in 1992 to win the Australian and French Open titles in the same year, taking him halfway to the fabled Grand Slam of tennis.

Top seed and defending champion Nadal made it through to the fourth round with a 6-1, 6-3, 6-0 win over Croatian qualifier Antonio Veic in a centre-court mismatch.

It was the Spaniard’s 41st win at Roland Garros against just the one defeat since he made his debut in 2005, but such was the paucity of the opposition that the win will answer few questions about his actual form.

“I think I did a few things much better than the previous days. Happy for that,” said Nadal, who had looked below his best in the first two rounds.

“I have to continue for this way, I think I played a solid match almost all the time. Just the beginning of the second, for moments of the second set, I had a few more mistakes.”

Also through from the top half of the draw on Saturday was Argentinian claycourt veteran Juan Ignacio Chela who saw off Lukas Rosol of the Czech Republic in four sets and Colombian qualifier Alejandro Falla who came through, also in four sets, against Poland’s Lukasz Kubot.