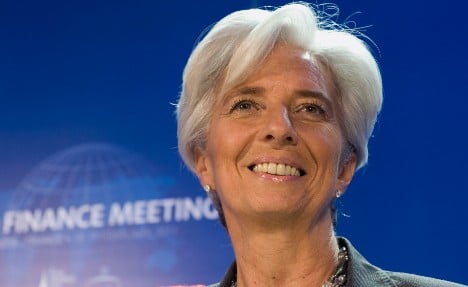 “Nations are also judged on their ability to occupy top international jobs. Germany, Europe’s biggest economy by far, has none of them right now,” the paper moaned.

Of all the names floated in the media to succeed Frenchman Dominique Strauss-Kahn as managing director of the IMF, the global of lender of last resort, none is from Germany, Europe’s economic powerhouse.

Chancellor Angela Merkel is playing her cards close to her chest, but on Friday she said she had “high regard” for French Finance Minister Christine Lagarde.

For many, this was a hint that she would end up supporting the 55-year-old.

Germany also looks set to go empty-handed when it comes to who will succeed Jean-Claude Trichet – another Frenchman, and also touted as a possible next IMF chief – as head of the European Central Bank (ECB) later this year.

The ECB president is arguably the most influential job in Europe, as the bank sets interest rates for more than 330 million people the 17-nation eurozone, the core of the the world’s largest trading bloc.

In its decade of existence, the ECB has had two heads, neither of them German. This time Berlin’s candidate Axel Weber, the chief of the Bundesbank, was initially seen as a shoo-in to succeed Trichet when he steps down.

But in February, Weber threw in the towel for “personal reasons,” leaving Germany no time to line up an alternative and forcing Merkel this month to reluctantly throw her weight behind Italian Mario Draghi for the job.

This was all the more galling as Berlin had refrained from pushing Germans for other top European jobs in order, analysts said, to keep its powder dry for the ECB top job.

The EU president is a Belgian, the president of the European Commission is Portuguese and the EU foreign policy chief is British. Germany’s highest-ranking European official is Guenther Oettinger, energy commissioner.

It is true that from 2000-2004 the head of the IMF was a German, Horst Koehler, but that is some time ago, and was before the global financial crisis, when the bank was less important than it is now.

Armed now with more cash, it has become a key player in the eurozone debt crisis, providing billions of euros towards bailouts of Greece, Ireland and Portugal.

But he added that Germany is content to pull strings behind the scenes in order to make sure things go its way, particularly as Europe seeks to respond to its debt crisis.

“For Germany, prestige is of secondary importance,” he said.