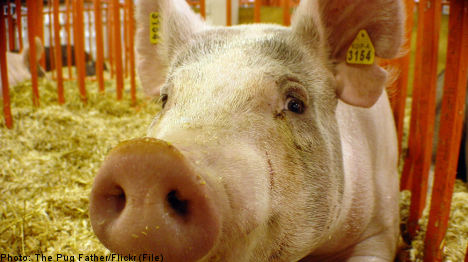 In Sweden pig ears, along with tails and feet, fetch a low price and are often simply thrown away in the slaughter process. In China however the items are in high demand.

“The Chinese use these parts as exclusive details,” said Sofia Jöngren at the Ministry for Rural Affairs to the political trade publication Riksdag & Departement.

The Board of Agriculture (Jordbruksverket) and National Food Administration (Livsmedelsverket) have been working on securing an export agreement for several years, the newspaper reports.

“We think an agreement is close. We feel that we have received positive signals,” Jöngren said.

The agreement would be of significant value to Swedish farmers as only Germany and Denmark have managed to secured similar agreements among the EU countries.

But certain issues remain unresolved and Chinese authorities are expected to conduct an inspection of Swedish pork products production to ensure that hygiene standards are met.

In Chinese cuisine a pig’s ear is often served as an appetizer or a side dish. The delicacy can be either boiled or stewed and is typically served thinly sliced and accompanied by soy sauce and spiced with chili paste.

A man wearing a protective suit in the district of Gütersloh after a coronavirus outbreak at a meat plant. Now neighbouring district Warendorf is going into lockdown. Photo: DPA

“In order to protect the population, we are now launching a further safety and security package to effectively combat the spread of the virus,” North Rhine-Westphalia health minister Karl-Josef Laumann said Tuesday, ordering a lockdown for the district of Warendorf.

Authorities had earlier announced similar measures in the neighbouring district of Gütersloh after more than 1,500 workers tested positive for Covid-19 at the slaughterhouse.

Almost 280,000 people live in Warendorf. Businesses and cultural facilities will close, while all schools and daycare centres (Kitas) will also shut their doors.

In Gütersloh the new lockdown affected 360,000 people living there and will be in place until at least June 30th.

It came after more than 1,500 workers out of a total of nearly 7,000 have tested positive for Covid-19 at the slaughterhouse in Rheda-Wiedenbrück run by Tönnies.

All workers are currently in quarantine. However, authorities are now turning to tougher rules to try and control the spread of coronavirus.

However, restaurants can remain open with rules in place.

Schools and Kitas were already closed last week in a bid to control the virus.