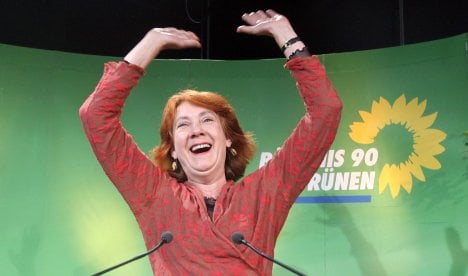 This was a further drubbing for Chancellor Angela Merkel following four other regional elections this year which have all seen her conservative Christian Democrats (CDU) shed support.

The Social Democrats (SPD), who have ruled the city-state of Bremen for 66 years, came out on top, and will be returned to power with their Green allies in the smallest of Germany’s 16 states, exit polls show.

“For the first time in the history of the German Federal Republic, we are ahead of the CDU in a regional election,” said one of the Green federal leaders Claudia Roth.

“The result is a difficult one for us,” the CDU’s parliamentary faction leader Peter Altmaier acknowledged on television.

“Unfortunately it reflects what opinion polls have said for weeks,” he added.

“Bremen has traditionally always been a difficult for the CDU,” he conceded.

“We find ourselves in a difficult environment,” he added pointing to the support gained by the Green ecologists in the wake of the Fukushima nuclear power plant disaster in March in Japan.

“Just think of Fukushima, of the economic situation with the banking crisis and the crisis that has hit some states such as Greece,” he added.

“This all heavily impacts a ruling party,” he added.

Merkel has found herself severely criticized at home for her handling of the international financial crisis, including measures to bail out debt-ridden Greece.

The SPD took some 38 percent of the vote, while their Green allies won between 22 and 23 percent, according to various exit polls.

Final results might not be known for several days because of a complicated ballot counting system.

In the last election conducted in 2007, the SDP had come out on top winning 36.7 percent of the vote, while the CDU had taken 25.6 percent.

The Greens had come third with 16.5 percent, while the far-left Linke party had won 8.4 percent of the vote. The FDP had chalked up six percent.

This election was marked by the voting of 16- and 17-year-olds, for the first time in a regional election.

Electors have to be aged at least 18 to vote in other regional or federal elections.

In seven states, 16-year-olds are allowed to vote in municipal elections. Despite this measure, voter turnout dropped from just over 57 to 54 percent.

The ruling CDU-FDP federal government has already lost control of the Bundesrat upper house of parliament, made up of representatives from the regional states, but regional elections this year have seen its support plummet.

In March, the CDU even lost Baden-Württemberg, where it had governed for nearly six decades.

The FDP, for its part, has gone from bad to worse, failing to win seats in two of the four state elections held to date and faring scarcely better in a third.

The Greens, by comparison, have gone from strength to strength, helped in part by worries over nuclear energy.

Bremen was the first regional state to elect environmentalists in 1979.

The debt-ridden city-port, has been run by the left-wing SPD since the end of World War II.

There will be two more regional elections this year in Germany, including Berlin in September.