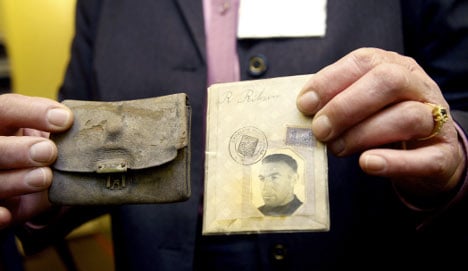 The Germany-based International Tracing Service (ITS), which is responsible for Nazi camp archives, said it was posting a list of personal belongings on the internet in a bid to track the owners or their relatives.

“It is our aim to return as many effects as possible to the survivors of Nazi persecution and their relatives,” said Jean-Luc Blondel, director of the ITS in Bad Arolsen, central Germany, in a statement.

ITS archives currently still hold about 2,900 items whose owners are known by name, most of them having coming from the Neuengamme concentration camp in Hamburg, northern Germany, and Dachau near Munich in the south.

The organisation also has a small number of items from the Bergen-Belsen concentration camp in central Germany, from Natzweiler in eastern France, along with items taken from Gestapo prisoners in Hamburg, and from people held in transit camps in Compiegne, France, and Amersfoort, Holland.

Items include wallets, identification papers, photographs and letters, the ITS said.

“In our opinion the mementos are in the best hands with the families,” he added.

The ITS said it still holds a total of 3,400 personal items handed over to it in 1963. It has spent years trying to identify and return the property.