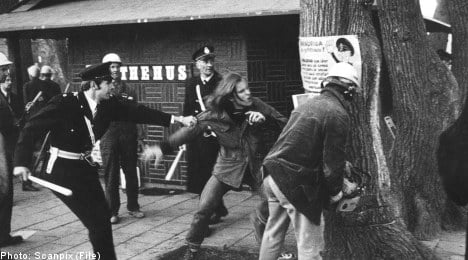 Rarely in history have so few trees had such a longstanding impact on a city. The so-called Elms Dispute (Almstriden) of 1971 not only led to a redrawing of the map of Stockholm’s inner city, but also paved the way for a new policy on restoration, regeneration and town planning that still lives on today.

Perhaps more importantly it gave rise to a wave of public protest that stretches well beyond the boundaries of architecture, and what started as a bid to save inner city trees in Stockholm’s Kungsträdgården city park, had broader consequences for how the city looks today.

“Quite simply, the legacy of the Elms Dispute is that it led to a much greater respect for people’s opinions, other voices are treated with much more respect now than they used to be,” says Arne Fredlund, assistant director of town planning with the Stockholm City Council.

The catalyst for the 1971 demonstration was an announcement from the Stockholm City Council that they were to fell 13 trees to make way for the construction of the metro station in Kungsträdgården.

The building of the metro station was part of the Norrmalm Regulation, a grand scale urban renewal programme which was started in the 1940s with the aim of creating a modern city centre and which would eventually spawn much of the central part of Stockholm.

It also served as a blueprint for parts of Warsaw and Hamburg and several other cities in Europe.

But protests began during the night between May 11th and 12th, 1971. Crowds of protestors marched into Normalm in central Stockholm horrified at the plan to cut down trees peppered around the square.

As news spread of the public demonstratation, more and more people from all walks of life arrived, until, at one stage, there were an estimated 250,000 people waving placards, chaining themselves to trees and making their collective voice heard.

The media, both nationally and abroad, were quick to pick up the story as more and more protestors thronged to the site, while popular artists of the time like Evert Taube and Cornelis Vreeswijk helped turn it into a celebrity cause célèbre as the tension began to rise.

“If the government and municipalities in Sweden are allowed to continue exercising their machinery of destruction from Stora Sjöfallet to the elms in Kungsträdgården – then Sweden will no longer be a civilised country,” Taube wrote at the time.

Facing the public backlash, the authorities mobilised police dogs and horses as the two sides faced off. As the number of demonstrators grew and dug in, it proved to be an interesting precursor to the days of social media and mobilising the masses.

To forewarn each other of any impending attacks from the police, they set up a telephone chain list, whereby human reinforcements could be called in at short notice if necessary.

Inevitably, violence finally flared up when builders were brought in and started to fell one of the trees with chainsaws. There were injuries on both sides as the protestors and authorities fought pitched battles, but when the fighting died down, a resolution was eventually agreed.

The incident was eventually regarded as a victory for the protestors. The proposal for the metro station was revised, saving the hotly disputed trees in the process, many of which are still standing today.

As a way of marking the 40th anniversary of the historic showdown, several demonstrations and celebrations took place across the city last week.

In reflecting on the legacy of the Elms Dispute in a recent column, Tommy Hammarström of the Expressen newspaper called the incident a “turning point” in which “what had been the exclusive concern of politicians and experts now became a matter directly for public opinion”.

“Tree huggers across the country united and broke the technocrats’ dictatorship,” writes Hammarström.

Meanwhile, events from 1971 are permanently commemorated on the walls of the undergound station in Kungsträdsgården, including parts of the house that had to be demolished to make way for the construction and a symbolic tree stump.

While visitors to Kungsträdgården today may owe a debt of gratitude to the 1971 protesters for saving the park’s elm trees, another lasting legacy of the Elms Dispute is the effects it had on how city planners approach their work.

“Looking back it is clear now that since that time there has been a more conscientious approach to town planning,” says Fredlund.

“Nowadays, planners have to take much more aspects and opinions into account and all of those affected have a chance to have their say and express their points of view.”

In recent weeks the BGH has confirmed rulings against far-right terrorists, police killers and murderous businessmen.

So the judges were no doubt happy for a bit of light relief when they were asked to deliberate a slightly less gruesome issue – whether the law allows one to cut back the branches of a neighbours tree that have grown over the fence.

This seemingly inconsequential matter of law made it all the way up to the highest court after a Berlin judge ruled in favour of the tree’s owner.

A Berlin man whose spruce tree had spread its branches into the neighbours garden filed a complaint when he saw that his neighbour had cut back the branches in his side of the fence.

The tree owner said that the action could have destabilized his tree and made it more vulnerable to being blown over by a storm. He even insisted that the pruning of its branches could lead the tree to die.

But on Friday the BGH ruled in favour of the tree pruner, saying he had a right to self-help which was provided for in the German Civil Code.

The judges emphasized that the right to self-help could be restricted by nature conservation regulations, such as tree protection statutes, but that these did not apply in this case.

SEE ALSO: The story of Germany’s oldest national park as it turns 50