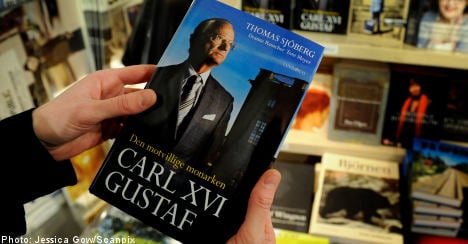 “I think that you should establish contact and try to find out what the agenda is, what he wants, and what he actually has,” Lettström is heard saying on the tape.

When the scandalous biography “Carl XVI Gustaf – Den motvillige monarken” (‘Carl XVI Gustaf – The Reluctant Monarch’) was published last year, one of the main sources was reputed gangster and night club host Mille Markovic, who gave a detailed account of controversial parties hosted at his club with the King and his friends in attendance.

According to Daniel Webb, bodyguard of alleged Swedish gangster Milan Sevo, the King’s close associates contacted him because they wanted to buy the incriminating material from Markovic and wanted Sevo to act as a go-between.

“I think that they wanted someone who moves in the same circles and that’s when they thought of Milan Sevo,” Webb told SR.

According to Webb, he subsequently met with one of the King’s closest friends, Anders Lettström, wearing a hidden microphone.

The conversations were taped over a handful of meetings last year, shortly after the controversial book had been released.

But Lettström denies having asked Webb to act on his behalf.

“I haven’t asked anyone to do anything, so that must be wrong,” he said to SR.

But on tape Lettström can be heard asking Webb to find out what material club owner Mille Markovic really had implicating the King and his friends.

According to Webb, several of the King’s close friends were keen on getting Markovic to recant his statements in the book about their visits to his club.

They were also worried about what kind of material Markovic himself possessed and what he was planning to do with it.

Markovic had previously said that he wanted to publish the material.

Webb subsequently contacted Markovic who said he wanted several million kronor to take back his statements and hand over the material, which Webb reported back to Lettström at the next meeting.

“There’s a risk that he is living in some kind of dream world when it come to this. Maybe, I don’t know. Then again, everyone really just wants some peace of mind and to get a way from this sorry business,” Lettström is heard to answer.

Despite the recordings, Anders Lettström continued to deny having talked to Webb when SR confronted him.

“I have never spoken to Mille, Milan etc. Through friends of friends I have been approached and offered to purchase images and denials of lies, which I have declined,” he wrote in an email to SR.

Another close friend of King Carl XVI Gustaf, Aje Philipsson, says that he hasn’t been involved in any negotiations but that he heard of the meetings after they had taken place.

“I have never met these gentlemen nor spoke to them and there is no chance that I have been involved in anything,” he told SR.

According to Webb, an agreement was reached and the King’s friends were subsequently made privy to some of the material in Markovic’s possession.

But then they started to haggle over the price and the deal fell through, according to Webb, who says he doesn’t know why they lost interest in reaching an agreement.

“In retrospect it is possible that the King’s friends were only interested in protecting themselves and not the King. When they saw he material they may have come to the conclusion that it wasn’t as interesting as they had thought,” Webb told SR.

The tapes consist of 8 hours of recorded material and were handed over by Webb to freelance journalist Nuri Kino who on Friday releases his book on Milan Sevo called “Den svenske gudfadern” (‘The Swedish Godfather’).

According to daily Expressen, the Royal Court denies having had any information on the deal.

“The King has had no knowledge of these actions,“ said Bertil Ternert, head of information, at the Royal Court to Expressen.