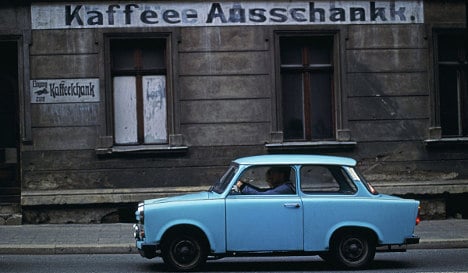 It’s been more than 20 years since the Berlin Wall crumbled amid a spate of democratic revolutions across eastern Europe. Yet the very idea of life under communism continues to captivate curious Germans.

For Yara-Colette Lemke, however, the exhibition she’s curating is more than a curiosity. It’s deeply personal. Her mother fled communist East Germany in the 1960s and Lemke grew up in the West. She says Über Leben (a German play on words that could be translated either as “About Life” or “Survival”) helps her make sense of the past.

“Yes it’s true that East Germany was grey, there were long lines and life was difficult,” she said. “Yet somehow there was community. It was the kind of place you could knock on a neighbour’s door at any time and have a coffee.”

The roughly 280 photos from photographers Thomas Hoepker and Daniel Biskup don’t idealize life in the German Democratic Republic or Eastern Europe. They show that there is a strange beauty in the face of hardship.

Somehow, inexplicably, things go on. That’s shown is Hoepker’s photo of an East German soldier and his girlfriend finding a quiet moment to kiss, or the gritty picture of a man with a hard hat headed to work at a communist factory.

Other photos show a starker reality. A man lays sunbathing on the crumbling roof of an apartment building. A family poses for a photo behind fancy food and drink provided by the Stasi, East Germany’s feared secret police, for propaganda purposes.

Though Über Leben spends much of it’s time concentrating on waning days of East Germany, a sizeable portion of the collection concentrates on events occurring in eastern Europe immediately after the fall of communism. The power struggles in Russia and the former Yugoslavia claimed thousands of lives.

Yet there too, resilient people went on with their lives and photographer Daniel Biskup was busy snapping pictures in refugee camps, on street corners and in cemeteries.

Among Lemke’s favourites are the stirring photo of a woman visiting her husband’s grave. Nearby is another photo of a smiling woman holding hands with another soldier.

“Who knows if he survived?” Lemke asked. “Not long before he was just like the other soldier who is now dead.”

Among the exhibition’s most evocative shots show not the horrors of war, but the weird realities and contradictions of living under communism – and the sudden new world for East Germans as they were assimilated into the more prosperous West in the early 1990s.

One photo shows an East German woman around 1990 or 1991 at a local supermarket stocked with food.

She stares bemusedly at life-sized model of the Milka Cow – that famous purple bovine symbolizing the superiority of western chocolate. In her eyes, Lemke sees confusion, symbolizing a clash of two very different worlds.

“It’s sad in a way,” Lemke said. “Suddenly the world as she knows it is completely different.”

Über Leben runs until October 3 at the German Historical Museum in Berlin. Guided tours are available.