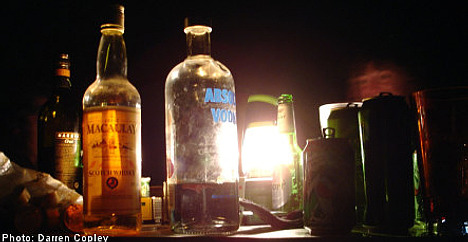 “His specific task in the performance was to drink, and we agreed in advance how much he should have,“ Maria Stiernborg of performing arts group Arena Baubo told The Local.

The production ‘Kulla-Gulla, Fassbinder and me’ is funded by the Swedish Arts Council (Kulturrådet), the Swedish Arts Grants Committee (Konstnärsnämnden) and Nordic Culture Point (Kulturkontakt Nord) and will tour Malmö, Stockholm and Uppsala.

Maria Stiernborg is a member of the group and one of the actors in charge of the production in question. According to her the whole concept is to show how people choose to, or decline to, take responsibility for other people.

“The performance is about co-dependency and how we take on roles like victim, rescuer and persecutor,” she said.

As part of Friday’s performance one of the actors was assigned the task of drinking forty millilitres of spirits every 6 minutes. After two hours he would thus have managed to consume approximately 6 decilitres.

Following his alcoholic binge the actor began to act aggressively, throwing things around. The actor became so dazed and confused that members of the audience had to ultimately intervene to calm him down and hide a second bottle, according to a report in the local Sydsvenskan daily.

“It was also an act, he was acting aggressively and chose to solve that particular task by criticising what was going on,“ Stiernborg said.

And according to Stiernborg despite the advance state of inebriation, the situation was never out of their control.

“It all went the way it was supposed to from an artistic perspective. By unleashing an uncertainty factor into the dramaturgy we could show things that we otherwise would not have been able to,“ she said.

Furthermore all the required safety precautions had been taken, if things would have turned ugly, Stiernborg confirmed.

“We were expecting him to get very drunk, but we had consulted a doctor before the show and there was a doctor on the premises, so we had him under observation.”‘

She added that the actor was kept under observation while asleep and steps were taken to ensure that he was feeling okay when he awoke.

While the Swedish Arts Council on Tuesday told The Local that they have a policy not to comment on individual performances, they were not aware of the content of the performance.

“What I can confirm is that this was not part of the application, it wasn’t very detailed at all,” Elin Norquist of the council told The Local.

The actor reportedly had a rough night but was reported to be feeling okay under the circumstances when he woke up on Saturday morning.