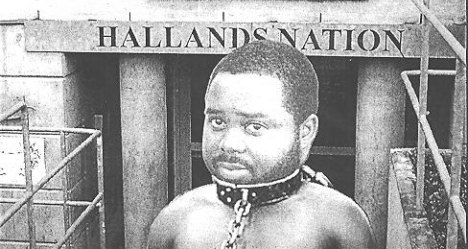 The RED Network, representing NGOs and research institutes from 17 EU member states, has expressed its deep concern over “the racist incidents depicting black people as ‘slaves’ at Lund University and Malmö University in Sweden”.

In an open letter to education minister Jan Björklund and integration minister Erik Ullenhag, the institute challenges the government to take a clear stand.

“While Swedish politicians are passive and quiet we have received support from the US, such as (the European Network Against Racism) ENAR, and now from the RED Network,” said Mariam Osman Sheifay, a Social Democrat MP and chair of the Center against Racism, a Sweden-based member of the RED Network.

The letter refers to a so-called “jungle party” held at a Lund student organisation, where three people with blackened faces and lynching ropes around their necks were sold in a mock auction.

The incident, first reported in a local Lund student newspaper, has since gripped the attention of civil rights heavyweights around the globe.

The European Network Against Racism (ENAR), based in Brussels, wrote an open letter to Sweden’s democracy minister Birgitta Ohlsson condemning the incident, urging the government to take action.

The tale took another turn when prominent US civil rights activist Jesse Jackson penned a complaint to Jan Björklund urging Sweden to take measures to ensure that Swedes are reminded of the brutal transatlantic slave trade and the part Sweden played in it.

While Lund University, one of Sweden’s most prestigious seats of learning, has since responded to the criticism by announcing a new programme to educate students and staff about the university’s core values, anti-racism campaigners have been left frustrated by the government’s reticence to speak out on the issue.

“It is time for the Swedish government and Swedish politicians to openly condemn and take a stand against racism and the racial hatred. Silence and half-hearted condemnation is the same as support for racist actions,” Mariam Osman Sheifay said in a comment on the letter.

Victoria Kawesa, a researcher at the Center Against Racism, told The Local that there is a gulf between Sweden’s image overseas and the reality faced by the afro-Swedish community.

“People we speak to are shocked that this occurred in Sweden. Sweden has a humane reputation but at home nobody takes a stand,” she said.

In a opinion article published in the Svenska Dagbladet daily at the weekend, Erik Ullenhag called for a united front against Islamophobia and anti-Semitism. Victoria Kawesa would like this call to include the afro-Swedish community.

“Erik Ullenhag has… written about hate in Sweden without naming the racist attacks against blacks, Afrophobia as a problem in Sweden,” she said.

“Black people are also Swedish citizens and have a right to be protected and to receive support against racist slights and attacks.”

Kawesa furthermore echoed Jesse Jackson’s calls for an education campaign to inform Swedes that the slave trade is part of the country’s history and something of deep concern for the Swedish population, in part and as a whole.

“We need to draw attention to the fact that Sweden was involved, this is an experience which we all share. The incident in Lund is an opportunity to address this,” she said.

The “slave auction” has been the subject of ridicule from some quarters, with one controversial Swedish artist, Dan Park, posting images of Jallow Momodou, who reported the incident, all over Malmö and Lund depicting him as a naked man in chains.

Park maintained that his art was “great humour” and the incident has furthermore been described by some as a “tasteless joke” and called for those alleging racism to toughen up.

“Racism has become a word that can be used, but the situations exist. There are people who say that we are easily offended, but that is easy to say when you are not the ones being insulted,” Victoria Kawesa told The Local.