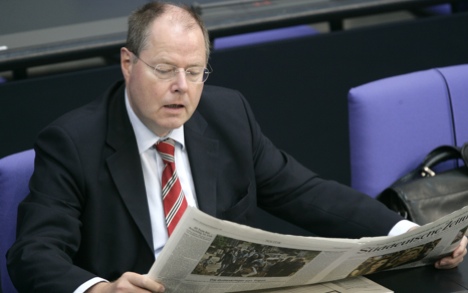 Steinbrück served as finance minister in Chancellor Angela Merkel’s first cabinet, from 2005 to 2009, when Germany was governed by a “grand coalition” of Merkel’s centre-right Christian Democratic Union and the centre-left SPD.

While he resigned his leading party positions following the SPD’s heavy defeat in 2009, he remained an MP in the German parliament.

Despite keeping a relatively low profile since then, he is still one of the more popular SPD politicians, and has been discussed positively in the German media.

“The time will come when I will have to discuss this matter with two or three leading people in the SPD,” he told Hessische Rundfunk broadcaster.

“If you decide to put yourself forward, then it has to be with all your energy and more than 100 percent commitment,” he said. “If you do it, then you want to win, and with every fibre of your being.”

Germany is due to hold its next general election in September or October 2013.