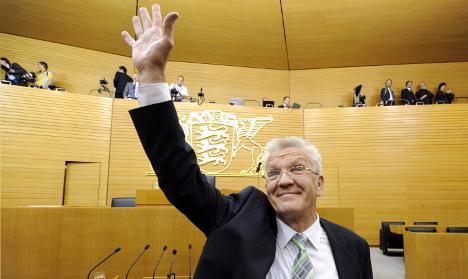 Kretschmann was elected on the first poll of state representatives, receiving 73 of the 138 votes to lead a Green-Social Democrat coalition, with at least two of the votes in his favour coming from the opposition.

“I take it as my task, that it is not my task to polarise, rather to bring people together,” he said, accepting the result.

The state has been divided over the last few months by the Stuttgart 21 plans for rebuilding the city’s central station and building a new rail line, which will cost billions and involve massive construction work.

The plans brought the normally conservative citizens of Stuttgart out onto the streets in repeated, massive demonstrations which many say were then handled badly by the police and politicians.

Kretschmann has already raised some hackles in the state which is home to large swathes of the German auto industry, by saying he would like to see fewer cars being made in the region.

The Green-led government is also set on making the state nuclear free as soon as possible – and as part-owner of energy giant EnBW, should be able to have some influence on the matter.

Although the coalition partners agree on many aims concerning education reform and budgetary matters, they are split on their attitude towards Stuttgart 21, with the Greens wanting to stop it but the Social Democrats insisting it should go ahead. A referendum will be held on it in the autumn.