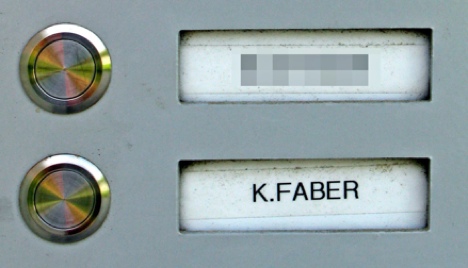 The ruling comes nearly six months after Dutch prosecutors issued a European arrest warrant for Klaas Carel Faber, 89, third on the Simon Wiesenthal Centre’s list of wanted Nazis, who is living freely in the Bavarian city of Ingolstadt.

A federal justice ministry spokeswoman said the case had been carefully re-examined, but was now definitively buried with Wednesday’s decision.

Faber, a member of a Nazi SS unit, was sentenced to death by a Dutch court in 1947 for murdering 22 Jews in the occupied Netherlands during World War II although this was later commuted to life imprisonment.

He escaped from Breda prison in the western Netherlands in 1952 with six other former SS men and fled to Germany, eventually settling in Ingolstadt in Bavaria where he worked for automaker Audi.

resistance attacks. He worked from 1943 to 1944 at Westerbork transit camp, where Dutch schoolgirl Anne Frank, whose diary became world-famous, was held before being sent to her death at Bergen-Belsen concentration camp.

Germany recognises the German citizenship Nazi dictator Adolf Hitler gave to all those serving in the SS, and does not extradite its own citizens.

Three previous attempts to bring Faber to justice failed, but German Justice Minister Sabine Leutheusser-Schnarrenberger, amid pressure from Israel, had pressed Bavaria, which has jurisdiction on the case, “to look for alternative solutions.”

This could include putting Faber in prison in Germany, the minister told

the Süddeutsche Zeitung daily in November.

But the justice ministry in the southern state played down the chances of this latest attempt, following others in 1954, 1957 and 2004, being successful.

“In 2004 there was a Dutch attempt for him to serve his sentence in Germany, which was rejected on the basis of a 1957 court decision dismissing the case for lack of evidence,” spokesman Stefan Heilmann told AFP news agency.

“In order to re-visit this decision, the Netherlands would have to present new and significant evidence.”

The American Gathering of Holocaust Survivors and their Descendants reacted

“This is a disgraceful moral offense to the memory of all who were brutalized and murdered by the Nazis and their collaborators in Holland – Jew and non-Jew,” vice president Elan Steinberg said in a statement.

“The victims of the Nazi occupation of the Netherlands whose terrible fate was encapsulated in the eloquent testimony of Anne Frank have been betrayed and the demands of justice have been scorned.”