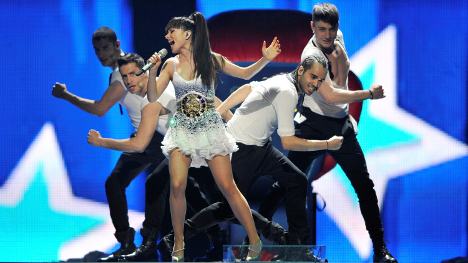 Although the impressive stage show went off without a hitch in front of 16,000 screaming fans, millions of viewers at home had to do without sound from commentators, as Serbia, Lithuania, Greece, Azerbaijan, Georgia, Switzerland, Hungary, Finland, Russia and Iceland booked spots in Saturday’s final.

Broadcaster ProSieben blamed the commentary blackout on “international problems” that would hopefully be ironed out before the second semi-final on Thursday.

Germany automatically qualifies for the final each year due to the amount of money it contributes to the kitschy song contest, but cash would not seem to confer technical prowess.

Along with several other foreign commentators, Germany’s legendary Eurovision reporter Peter Urban was forced to use a telephone after the sound was cut from the arena. Urban even reportedly complained over the air that it felt like the show was being broadcast from Kazakhstan rather than Düsseldorf.

Of the three hosts on stage, the German media generally agreed on Wednesday that the semi-final was saved by the trilingual comedienne Anke Engelke.

The normally boisterous Stefan Raab, the mentor of Germany’s Eurovision contestant Lena, was compelled to remain in the background due to his poor foreign language skills. English? Zero points.