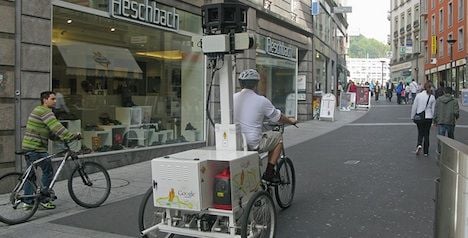 The judgement from the Federal Administrative Tribunal ordered the Internet giant to ensure that all people and cars pictured on Street View were unrecognisable.

“In the interest of Internet users and Swiss companies, Google will lodge an appeal …before the Federal Tribunal so that Street View can still be offered in Switzerland,” the firm said in a statement.

Google warned that it might be forced to shut down the facility for Switzerland even though it was used by what it said was “half of the Swiss population.”

“The decision of the Federal Administrative Tribunal requires us to guarantee that 100 percent of faces and licence plate are not identifiable. We simply cannot comply with that.

Street View allows users to take a ground level panoramic view of some locations on Google Maps, based on still photographs taken by specially equipped vehicles.

Data protection commissioner Hanspeter Thuer has accused the Internet firm of refusing to apply most of his recommendations, while Google claims it must rely on an automatic blurring system for faces and vehicle registration plates.

The Federal Administrative Court ruled last month that all faces and number plates must be made unrecognisable before they can be published on the Internet.

Google argued on Wednesday that about 1,000 Swiss companies had already integrated Street View into their websites, including property agents,the post office and city councils.

In its ruling published on April 4, the administrative court concluded that the public interest in having a visual record and Google’s commercial interests could not outweigh an individual’s right over their own image.

It said “the pictures can be made more or totally unrecognisable, and this is a proportionate measure.”

Google’s Street View has sparked similar privacy concerns and legal battles in several other countries, including Belgium, France, Germany and the Netherlands.

France’s data privacy regulator imposed a record fine of 100,000 euros ($142,000) on Google in March for collecting private information while compiling photos for the service.