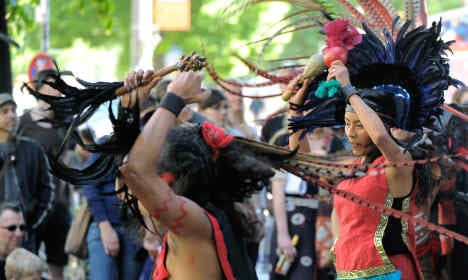 Around 500 people showed up on Saturday to demonstrate their dedication to the project, which has been running in the former department store since 1990.

Prominent figures of the semi-underground culture scene such as Love Parade founder Dr Motte, have become active supporters of Tacheles in its current incarnation.

But although countless positive meetings have been held with prominent Berlin politicians as well as officials, neither current mayor Klaus Wowereit nor Green Party challenger Renate Künast turned up at the demonstration.

“If the politicians don’t do something, we will simply continue,” said Linda Cerna, spokeswoman for the artists. She said Wowereit and Künast had been invited at the weekend.

The artists still fighting to try to save the famous ruined building from developers, want to present Wowereit with a petition which has at least 110,000 signatures gathered over the last 18 months.

The former squat, which features in practically every tour guide of Berlin, and which is known around the globe as a centre for alternative, free, art and culture, was supposed to be auctioned off last month.

The sale was cancelled at the last minute after creditor HSH Nordbank said a number of crucial details were still not settled.

A day later, one group of artists accepted payment of €1 million to leave their workshops and a bar on the ground floor, although it has not yet been revealed where the money came from. Shortly afterwards, the entrance to the open ground behind the building was walled off by administrators.