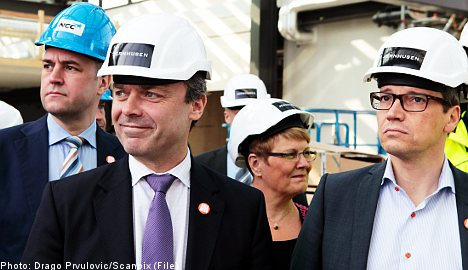 The four-party Alliance government retains a lead of just 2.2 percentage points over the Social Democrats, Greens and Left Party, according to a survey of 1,000 voters by pollster Skop.

The Moderate Party, headed by Prime Minster Fredrik Reinfeldt, has dropped 1.1 points since the previous poll but remains the largest party with 33.4 percent.

“The Alliance is in a downward trend,” said Skop analyst Birgitta Hultåker in a statement. “The centre-right lead was strongest at the start of the year when the gap between the blocs was 12.8 percent. Since then the lead has gradually been reduced.”

The Social Democrats, sitting in opposition for an unprecedented second term, trail the Moderates by 3 points and have not witnessed a major upsurge in support since the appointment of new leader Håkan Juholt.

All eight parties in parliament surpassed the 4 percent threshold required for representation.

The far-right Sweden Democrats continued to enjoy more support than the Centre Party and the Christian Democrats, both of which form part of the governing Alliance.

Skop polled voters from April 13 to May 5. Respondents were asked to name their favourite national political party.