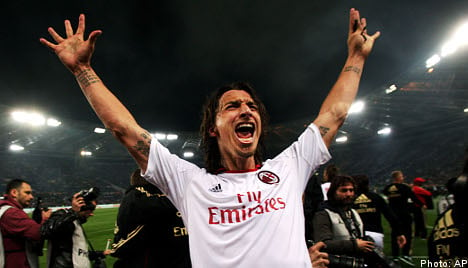 A 0-0 draw with Roma was enough to give AC Milan its 18th Italian league crown with two games to spare.

“It’s been a long year,” Ibrahimovic told news agency TT. “We’ve had times of suffering, times of victory, times of enjoyment, and now finally we have the trophy in our hands.”

For Ibrahimovic, who scored 14 goals in 29 league games, this was his eighth league title in a row and ninth in total with five different clubs across three countries, according to the 29-year-old.

Unfortunately for Ibrahimovic, two of those were stripped from Juventus for match-fixing in 2005 and 2006 meaning this was only his fifth in a row and seventh in total. But that doesn’t change the fact that the team he has played for has finished top of the pile for the last eight seasons.

When he was at Juventus, they were considered the best in Italy, likewise with Inter Milan and now Milan. He was also part of title-winning sides at Ajax and Barcelona.

And what Ibrahimovic brings was in evidence again this season as time and again he made the difference when his team appeared to be struggling.

Ibra has weighed in with a number of winning goals and crucial assists and has been one of the main reasons Milan have scraped victories where their rivals stumbled.