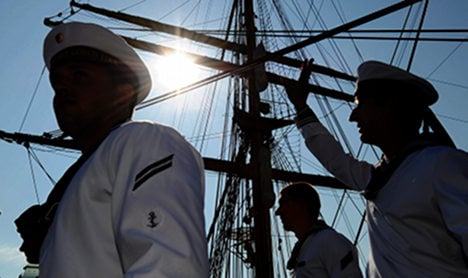 As a brass band welcomed the tall ship into port, officials said they didn’t know what its future would be with questions still swirling about what actually happened on board during a trip to South America.

The cadet, identified as 25-year-old Sara S., fell to her death after being asked to climb the rigging last November. The ship’s roughly 70 cadets were eventually flown home after they allegedly refused to continue training under their commanders.

A series of disturbing allegations subsequently emerged, including that officers drank heavily and forced cadets to scrub their vomit off the deck and that the vessel’s commanding officer was “mainly seen wearing bathing trunks.” Other cadets accused officers of sexual assault in the ship’s showers. The parents of a cadet who drowned while serving on the ship in 2008 also demanded a new inquiry.

A Navy report subsequently cleared Capt. Norbert Schatz of the most damaging allegations, leading to calls that he be reinstated as the ship’s commander.

Some of those allegations came from a series of memos by German parliamentary liaison to the military Hellmut Königshaus, which were leaked to the media. Parliamentarians then criticized him as damaging confidence in the military.

But in an interview with ZDF public television Friday, Königshaus strongly defended himself, saying he was obliged to look into the situation and denying that he played a role in leaks.

“I have never made it public,” he told ZDF, saying he only sent reports to government officials. “Other people exposed the whole situation.”

Könighaus said the ship “remains the pride of the Navy” despite all the controversy. “Overall, we have no reason now to condemn the vessel,” he said.

The Navy says it has made improvements since the death of Sara S., including building a safer practice mast for cadets and putting GPS transmitters in lifejackets to make it easier to track those who fall overboard.

Könighaus told news station N-TV Friday that he wanted there to be clear rules in place for future cadets.

“It just has to be clear what the cadets have to do, and what they should do so voluntarily,” he said.

A final report from the Defence Ministry is due in June and civilian prosecutors are also investigating what happened.

But the family of Sara S. said it continues to be concerned with how the Navy has handled the case – including the formal way the Gorch Fock was received in port on Friday.

“We as a family feel that the Navy has already forgotten that people died on board,” said Sara S.’s uncle Roland Seele.