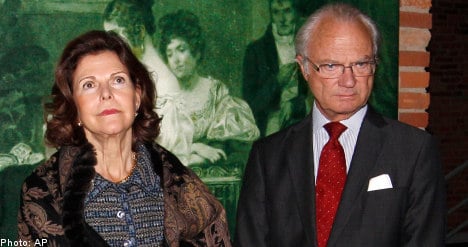 “I am amazed that he has achieved such success,” the King is quoted as saying of Larsson in an interview published on Tuesday by Polish daily Gazeta Wyborcza.

“Maybe it’s because Sweden hasn’t been associated previously with the criminal world Larsson describes? I’m not happy about this because Larsson’s books are horrible, rather than joyful.”

The King and Queen Silvia, in Poland on a state visit this week, were asked about a wide range of topics during an interview with the Polish newspaper published in conjunction with their visit.

According to Gazeta Wyborcza, Queen Silvia shared her husband’s concerns about the Millennium books, saying she was “shocked” by their violence.

“I don’t want to identify our country with what he writes. Larsson’s story should be treated like a book. It’s not an accurate picture of Sweden,” she is quoted as saying.

The three books penned by Larsson, who died in 2004, have all become best sellers in Sweden and internationally, selling tens of millions of copies worldwide.

When asked later about comments which appeared to denigrate one of Sweden’s most successful cultural exports, the King laughed, claiming he had been misunderstood by the Polish newspaper.

“I told the Polish journalists that the last book was quite unpleasant. Period, question mark, exclamation mark,” the King told the Expressen newspaper.

“Then it’s up to each and every individual to understand what I mean.”

The Kind added that he has in fact read Larsson’s books and thinks they are “really good”.