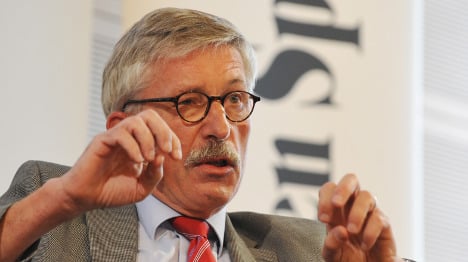 In his first public comments since the centre-left party decided to drop its efforts to throw him out, Sarrazin spoke out in characteristic blunt style against his party’s plan to introduce an “migrant” quota for senior positions.

“Intelligence doesn’t depend on whether or not you’re a migrant,” he said Tuesday night at an event in Waltrop in the Ruhr region of North Rhine-Westphalia.

There were already prominent party members in Berlin of foreign ancestry, he said.

“The more migrant-minded these people are, the less inclined they have been to see problems or difficulties objectively,” he said.

SPD leader Sigmar Gabriel and general secretary Andrea Nahles announced on Monday the party would introduce an immigrant quota – widely seen as a reaction to criticism the party received after its leaders announced the were dropping procedures to kick Sarrazin out. Some 15 percent of leadership positions in the party will be prioritised for people of non-German backgrounds.

The decision not to eject Sarrazin has sparked a backlash. Nazim Kenan, 26, a rising SPD star in the state of Hesse of Kurdish background, announced he was quitting the party, citing the leadership’s “opportunistic approach” to the affair.

Sarrazin has consistently courted controversy with his provocative remarks about immigration and Muslims, most acutely last year when he published a best-selling book on the subject. Among other things, it suggests that certain ethnic groups, notably from Muslim countries tend to be less intelligent and are therefore holding Germany back when they migrate here.

Sarrazin said in Waltrop that anyone denying the hereditary nature of intelligence was “vacuous or criminally lazy-minded.”