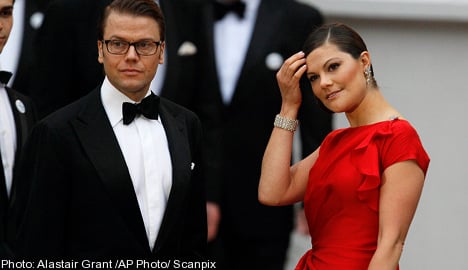 “When Victoria arrived the 300 or so photographers all went crazy and shouted her name,” royal reporter Johan T Lindwall said to the Expessen newspaper.

Victoria was wearing a red dress and waved to the public as she walked the red carpet to the entrance of the hotel. When asked if she was looking forward to Friday’s wedding she just smiled.

Thursday’s event was to give the Royal guests a chance to meet and mingle ahead of the wedding, and according to Lindwall, Victoria really stole the show when she arrived.

However, Victoria and Daniel will not be attending all the festivities planned for the wedding celebration, and experts say they are probably not among the chose 300 invited to the wedding party.

“They are not part of the inner circle. They are neither related to the couple, nor do they socialise with them,” Jenny Alexandersson, royal reporter from daily Aftonbladet, told daily Svenska Dagbladet (SvD).

Neither the British nor the Swedish Royal Court wanted to disclose whether or not Victoria and Daniel had been invited to the party in the evening.

According to Alexandersson the British Royals have separated guests into three groups; 1900 guests are invited to witness the ceremony in Westminster Abbey, 650 will be attending the luncheon served at Buckingham Palace, and 300 VIP guests will get to party the night away with Kate and Wills.

Victoria and Daniel will only be present at the wedding ceremony and the luncheon and are scheduled to fly back on Friday evening to attend the celebrations of King Carl XVI Gustaf’s 65th birthday on Saturday, according to SvD.

In Alexandersson’s opinion the British Royal house has a closer connection both to the Danish and Norwegian Royal family. The Swedish house of Bernadotte is less closely connected to the Windsors than their Scandinavian neighbours.

“Their relationship to the British Royals is more that of colleagues. And William and Harry didn’t come to Victoria’s wedding, the British court sent Edward and Sophie instead,” Alexandersson told SvD.