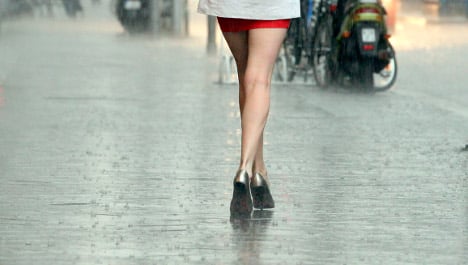 With temperatures climbing into the mid-20s over Easter, Germans took advantage of the unseasonably warm weather and flocked to beaches, beer gardens and parks across the country.

But the first part of the short workweek will see sunscreen give way to umbrellas.

A high pressure systems passing over northern Europe will mean cooler temperatures for northern Germany, while remaining areas will see showers and possible thunderstorms, according to the German Weather Service (DWD).

“Temperatures most definitely won’t reach the highs from last weekend any time soon,” said DWD meteorologist Dorothea Paetzold in a statement. “But we can expect sunny and dry outdoor weather this coming weekend.”

It remains to be seen if the rain will be enough to reduce the risk of wildfires, which some observers feared during the warm, dry weather over the Easter holidays.

Tuesday night, much of the country will see scattered showers and thunderstorms, while the northwest will stay relatively dry.

Wednesday will be mostly cloudy with strong thunderstorms possible. Western and northern regions have the best chance for sunshine, with highs between 12 and 18 degrees Celsius, while coastal and mountain regions will be cooled by moderate winds from the northeast.

Many regions will see stronger rain and fog Wednesday night, with temperatures falling between 4 and 10 degrees.

On Thursday, west and central Germany will see heavy cloud cover with thunderstorms likely. In the east, the weather will be relatively clear, with the sun bringing the temperature to 15 to 20 degrees, even reaching 23 degrees in Saxony and Brandenburg. Coastal regions will see a high of 12 degrees, cooled by winds out of the northeast.

In the west, showers will continue into Thursday night before the cloud cover dissipates Friday morning, with temperatures between 4 and 10 degrees.

On Friday, northern and central regions will be sunny, while the south and southwest will remain cloudy with showers and thunderstorms possible. High temperatures will reach 15 degrees in the northeast and 23 degrees in the west, while coastal highs will remain around 12 degrees as a result of cool easterly winds.

Friday night will be mostly clear across the country, but the air will remain cool, between 3 and 11 degrees.