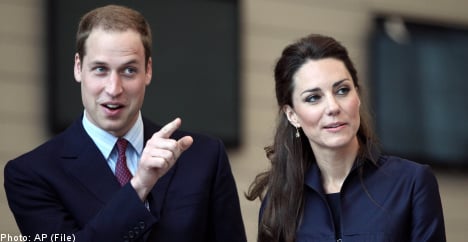 Three representatives from the Swedish Republican Association (Republikanska Föreningen) will take part in the alternative activities organized by their British counterpart ‘Republic’.

“We are going there to offer our support, but also hope to further the cooperation between our organisations in shaping public opinion,” Helena Tolvhed, board member of the association, told The Local.

During last year’s Swedish Royal wedding, when Crown Princess Victoria married Daniel Westling, the association had organised an alternative celebration in Sweden, which received a lot of attention from the Swedish press.

According to Tolvhed the wedding in itself made more Swedes focus on the question of a monarchy as a system of government.

“We saw last year that this kind of event makes more people reflect on whether they agree with the institution of monarchy, a phenomenon that we view as an outdated principle,” Tolvhed said.

In Sweden, interest in the association soared in 2010 and membership rose from about 3,500 to 7,500. A phenomenon Tolvhed thinks may be reflected in the British numbers this year.

The Swedish Republican Association had invited members from similar groups across Europe to take part in their activities surrounding Victoria’s nuptials.

Following the Swedish wedding, republican groups from seven countries formed the Alliance of European Republican Movements to share ideas and co-operate in their mutual aim.

The British representatives were inspired by what they saw in Sweden in 2010 and have used their experiences in the campaign around the wedding of Prince William to Kate Middleton next weekend.

“The Swedish organisation gained new support from the hype around the wedding and we saw how they were able to use the event in a positive way. That gave us the confidence to do the same thing,“ Graham Smith, campaign manager at Republic, told The Local.

He doesn’t think that the public’s view on the monarchy in the UK is different enough from Sweden’s to warrant a different approach.

“We have a similar campaign and similar aims, the only difference is perhaps that our event is somewhat bigger – but we learnt from Sweden just what could be achieved,“ he said.

Republic has planned an alternative street party called ‘Not the Royal Street Party’ during the day of the wedding, and ‘Love Republic’ – continued festivities in the evening.

The day after the nuptials will see the second convention of the Alliance of European Republican Movements, with representatives from Spain, the Netherlands, Belgium, Denmark, Norway and Sweden in attendance.

On their website the British republican association promises to announce their ‘ambitious new plans to rid Britain of the monarchy’ during the conference.

Helena Tolvhed doesn’t think that it is counter-productive in any way for a republican association to give a Royal event this kind of attention.

“These royal festivities take on the guise of a national event and our aim is to show that there is a choice. When it comes to shaping public opinion these events actually give us a chance to show that there is an alternative – that not everyone is included. So we acknowledge and celebrate that change is possible,“ she told The Local.