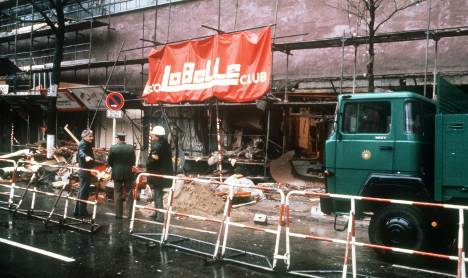 Lawyers representing victims of the Berlin disco bombing, which killed three people and injured more than 200, have written to the government asking for around €600 million to be set aside for them, according to Der Spiegel magazine.

A 21-year-old American soldier and a 28-year-old Turkish woman were killed in the blast at the West Berlin disco, while another badly injured soldier died a few weeks later. A bomb containing metal shrapnel was detonated near the dance floor. It not only killed the three who died, but left others with missing limbs and burns.

The small group who planted the bomb, in revenge for the American sinking of two Libyan patrol boats the previous month, were thought to have been told to do so by the Libyan government, although this has not been proven.

This week’s letter, which has been sent to Economics Minister Rainer Brüderle and Foreign Minister Guido Westerwelle, puts the government in an awkward position as it has not yet decided what to do with the Qaddafi money.

Around €6 billion of the Libyan dictator’s fortune has been frozen in Germany, which Brüderle has already suggested could be used to pay for humanitarian missions to help the people of Libya.

Such a move is only thought to be legally feasible as part of a coordinated European Union move to use all the frozen Qaddafi money for such missions, possibly via the United Nations.

But now lawyers in Germany are arguing that the injured Germans and the Turkish woman who was killed in the bombing, should see some of the money.

They were paid some money via Qaddafi’s son Saif al-Islam’s foundation as a ‘humanitarian gesture’, but this was said to have been well under the level which might have otherwise been expected.