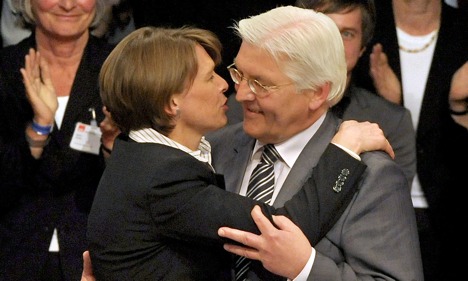 Steinmeier with his wife Elke, to whom he donated a kidney last year. Photo: DPA

Steinmeier, who donated a kidney to wife last summer, told Sunday’s edition of Super Illu magazine that the question of organ donation, “should be brought into a person’s life, not forced on the relatives after their death.”

The SPD politician pointed to a recent poll that said 75 percent of Germans would donate their organs, while only 15 percent had an organ donor’s card to show it.

“We need to close that immense gap,” Steinmeier said.

He said his proposed law should also decide who would be in charge of asking about the willingness to donate organs. “If it was the state health insurance companies, they could then take over all the information-gathering and disclosure duties and put the data on people’s insurance chip-cards,” he suggested.

He added that everyone would of course be given the chance to change their minds at any time.

Two Bundestag hearings have been planned on the issue in June, and Steinmeier hopes that a law proposal will be put to the parliament before the summer recess. “There could be a new law by the end of the year,” he said.