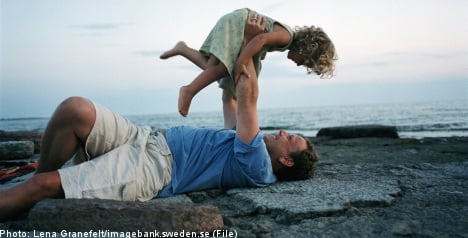 A study by the Swedish Confederation for Professional Employees (TCO), a white collar union group, show that, despite increasing numbers of fathers taking out parental leave, it will be another 31 years before Swedish parents will take an equal share, if the current rate of development is anything to go by.

“It gets better every year but it is a slow progress,” Lena Orpana statistician at TCO told newspaper Metro.

The figures for this year show a trend that fathers are taking an increasing number of parental leave days, but there may be demographic factors behind the increase.

After last year’s baby boom there is a slightly higher percentage of children in Sweden around the age of one. Fathers traditionally take out parental leave when their child is around one year old.

“It is gratifying to see that fathers are taking more parental leave. An equal time at home with children is the foundation for equality at home and results in a better connection between father and children,” Sture Nordh, chairman of TCO, said in a statement.

The largest percentage of ‘father days’ are taken in Västerbotten County, in the north west of Sweden, closely followed by Uppsala, just north of Stockholm.

The municipality where fathers are using the most parental leave days in the country was Knivsta, just outside of Uppsala.

Although the figures from the last few years show an increasing trend, at the current rate of development, parents in Sweden won’t be taking out an equal share of leave until 2042.

“It does make you wonder when parental leave bonuses and time earmarked especially for the father is not enough to convince fathers to stay at home with their kids,” said Nordh.

Young fathers are the the least likely to use their parental leave benefits, according to the study, with 35 percent of fathers under 35 not even taking out the month that is reserved for them.

“It is really unfortunate. Maybe it is because younger men are more insecure and haven’t established themselves at their work place,” Orpana said to Metro.

The Swedish system of parental leave allows for a total of 480 days’ leave per child which can used up until the child starts school at seven. 60 of these days are reserved for each parent, while the other days can be disposed of as the parents deem fit.